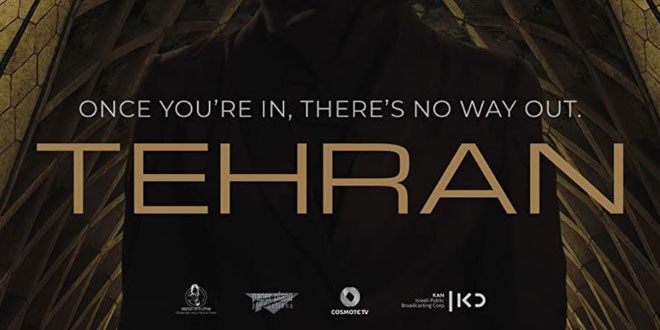 A Mossad agent embarks on her first mission as a computer hacker in her home town of Tehran.

Tehran is an Israeli espionage thriller television series created by Moshe Zonder for the Israeli public channel Kan 11. The series is written by Zonder and Omri Shenhar and directed by Daniel Syrkin. The series is about the Israeli–Iranian conflict.

The series premiered in Israel on June 22, 2020 and September 25 internationally on Apple TV+.

Protagonist Tamar Rabinyan, a young Jewish woman born in Iran but raised in Israel, is a Mossad agent and computer hacker on an undercover mission in the Iranian capital to disable a nuclear reactor. Her objective is neutralizing Iranian air defenses so that Israeli warplanes can bomb a nuclear plant and prevent Iran from obtaining an atomic bomb. When she arrives in Iran she switches identities with Zhila Gorbanifar, a Muslim employee of the local electric company. In Zhila’s place she enters the electric company station and connects to the computer network. Then she tries to cut electric power to the Iranian radar system, in order to facilitate an ongoing Israeli Air Force attack. Her mission fails because her boss, who thinks she is Zhila, tries to rape her and is killed as a result of their fight. She escapes and goes into hiding. Tamar was born in Iran and moved to Israel when she was six, and she now discovers her local roots, goes to see her aunt, and befriends Iranian pro-democracy activists. Meanwhile, she is hunted by Faraz Kamali, head of investigations of the Revolutionary Guards.

From the writer of Fauda, thrilling spy series is another win for Apple TV+

Skullduggery is afoot in Apple’s new spy drama, Tehran. It’s a show that toys with the conventions of the genre, but also feels refreshingly current at the same time.

Co-created by Moshe Zonder, one of the writers of Netflix’s Fauda, Tehran isn’t technically an Apple production — like much of the streamer’s recent programming, it is an acquisition — but the show has a slickness that the brand is synonymous with.

So even when the pace begins to lag around halfway through the eight-episode season, the show’s sleek visuals and head-bobbing score keep things moving along. In fact, even though I was tempted to fast-forward through some of the more slovenly paced scenes on several occasions, I never skipped the fantastic opening credits sequence, set to finest theme song since HBO’s Succession.

Much like the theme, which itself sounds like a mashup of the classical and the contemporary — as if Skrillex got his hands on a shehnai — the show offers old-school intrigue, but through a decidedly humanist lens. It isn’t quite the success that Yoon Jong-bin’s The Spy Gone North was — that film remains my favorite espionage thriller of the last five years — but it’s certainly on par with Meghna Gulzar’s Raazi.

It tells the story of Tamar Rabinyan, an Israeli spy who has the resourcefulness of Jason Bourne and the accent of Gal Gadot. Or maybe she doesn’t, and I’m missing cultural nuances. Not having an intimate knowledge of Iran-Israel relations can certainly put the viewer on a slight back foot when it comes to understanding some of the historical context.

Tamar’s cultural background — she belongs to a community of Persian Jews — makes her the perfect candidate for the Mossad to send into Tehran, on a mission to disable an Iranian nuclear reactor. It’s thrilling to watch Tamar infiltrate the city, using the sort of old-fashioned spy craft that would make John le Carré proud.

These early scenes set the tone. After successfully entering Tehran, all the necessary exposition is smartly conveyed during a taxi ride. The driver notices her strange accent, which gives Tamar the opportunity to provide him (and us) with a brief backstory about herself. A more cliched version of this scene would probably have shown Tamar being tutored by her handlers. But in Tehran, the show, we are given valuable information through storytelling.

During the taxi ride, Tamar also notices a public execution. She’s aghast, not only at the barbarism on display, but also at the crowd playing spectator. Immediately, it is clear who the villain of the story is. But while the show, an Israeli production, is undoubtedly biased against the Ayatollah’s regime, it also spends a significant amount of time humanizing the men and women who serve it. They are merely pawns, it suggests, rather nobly.

Much of the first season’s plot is dedicated to the cat-and-mouse game that unfolds between Tamar and Faraz, a member of the Revolutionary Guard, played by Shaun Toub, whom you might recognize as Yinsen from the Iron Man movies. I admired how Faraz was written not as a ruthless villain, but simply as someone doing his job, and serving the nation he has sworn to protect. Later episodes reveal him to be a man driven not only by a sense of duty, but also real, relatable emotions. There’s empathetic subtext about lost cultural identity and the disenfranchisement of entire communities.

Tehran does, however, suffer from an unmistakable saviour complex. It implies that not even Iranians — especially the raving, promiscuous, cocaine-snorting youth — are pleased with the state of affairs in their country. To gain further access into the nuclear programme, Tamar enlists the help of a young dissident, who appears to be torn between a love for his nation, and an anger directed at the government in charge of running it.

The show isn’t as ham-fisted as the recent Netflix series The Spy, but it is certainly a solid entry in Apple’s steadily improving catalogue. After the terrific animated musical Central Park, the stirring documentary Boys State, and the spectacular sports comedy Ted Lasso (one of my favorite show’s of the year), Tehran is another compelling reason for you to give the curiously sidelined Apple TV+ a shot.