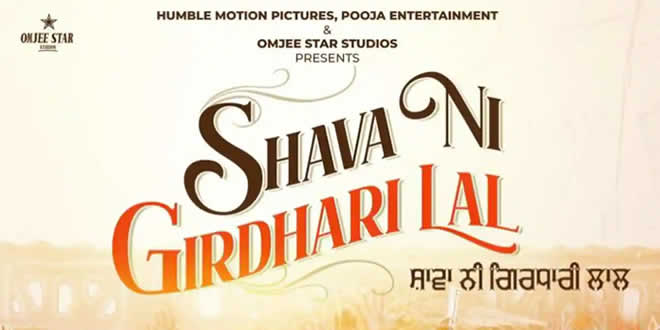 Shava Ni Girdhari Lal is an upcoming Indian Punjabi-language comedy film directed by Gippy Grewal from a screenplay co-written with Rana Ranbir. Produced by Gippy Grewal, Vashu Bhagnani and Ashu Munish Sahani under the banners of Humble Motion Pictures, Pooja Entertainment and Omjee Star Studios, it stars Gippy Grewal, Neeru Bajwa and Himanshi Khurana in lead role . The film is a period comedy and plot is set in the 1940s. The principal photography of the film began on 3 April 2021, and it is scheduled to be theatrically released on 17 December 2021.

Principal photography of the film started on 3 April 2021.

The film is scheduled to be released theatrically on 17 December 2021.

There is no doubt in the fact that all the fans of Gippy Grewal were waiting for the release of Shava Ni Girdhari Lal with their hearts filled with excitement. And now the wait is finally over as the movie has been released and we have a full fledged & honest review for you.

Starting with the most prominent part that makes the movie unique from others i.e. the starcast; Shava Ni Girdhari Lal has featured a number of amazing actors that you will surely miss the count throughout the movie. While Gippy Grewal plays the lead character in the movie, Himanshi Khurrana, Neeru Bajwa, Tanu Grewal, Payal Rajput, Sara Gurpal and Surilie Gautam are the actresses featured opposite him. And not only this, the film has also marked the great performances of many supporting actors including Sardar Sohi, Baljinder Kaur Sharma, Karamjit Anmol, Gurpreet Ghuggi, Seema Kaushal and more. Each and everyone’s character was well defined, but the show stealer was Gippy Grewal himself. He plays a naive bachelor man who is desperate to get married. Throughout the movie he meets and tries to woo various girls and expresses his desire to get married. And his individual experiences with various girls is exactly what the movie is all about.

One after another, you’ll see Girdhari trying to impress girls and him getting hit by harsh life experiences. He gets fooled, tries to elope, gets disappointed and again finds happiness, and this journey of Girdhari is the plot the movie follows.

Mentioning about the music and background score of the movie, it will surely try its possible best to entertain you. But here comes the disappointing part of the review. We don’t doubt the fact that the makers of Shava Ni Girdhari Lal have tried their level best to serve something new and fresh, but unfortunately they failed to impress us with the unexpected.

If you’re a person who is really into movies and their plot, you might get disappointed with the fact that the movie will not serve you with exciting twists and turns. What you think of and predict after watching the trailer of this movie is exactly what it’s plot is about. And above that, we didn’t personally like how the movie ended. With all strings loose, hanging end and no proper conclusion, we left the theaters unhappy.

So our overview for this movie is of a disappointed fan. We believe this movie could have been a great watch if the makers would have tried to keep the theme of the movie specific. Either it could have been a movie with a heart winning life lesson, or an over the top comic entertainer.

So this was all we could reveal about the movie for you. We can discuss a lot more, but it will eventually spill the beans for you. Hence, we are ending this review with a very straight forward and not honey-coated conclusion that you might like the movie only if you are a hard-core Gippy Grewal fan.