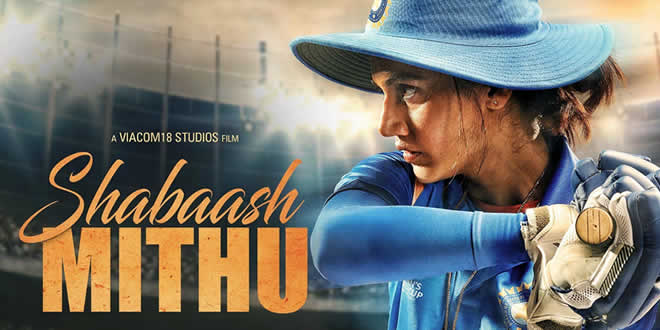 Shabaash Mithu is an upcoming Indian Hindi-language biographical sports drama film directed by Srijit Mukherji and produced by Viacom18 Studios. The film based on the life of current Test and ODI captain of the India women’s national cricket team, Mithali Raj, stars Taapsee Pannu in titular role. It chronicles ups and downs and moments of glory of Mithali’s life. It is scheduled to release theatrically on 15 July, 2022.

The film based on her life chronicles the events of her life’s journey in the world of women cricket. It presents her struggles and euphoric rise in the women cricket.

After the 2017 Women’s Cricket World Cup, Viacom 18 Motion Pictures acquired the rights to make a feature film on Raj’s life. She said, “Hoping that this movie inspires more people, especially young girls to take up sports as a career.”

The biopic was planned to shoot in 2019. Raj said, “I think Priyanka Chopra will be a great choice (to play me in the biopic). Our personalities match a lot. I am not a movie buff, so I’d love the experts to do their job.” Finally it was Taapsee Pannu who was chosen to play the role of Mithali Raj in the biopic named as Shabaash Mithu, to be directed by Rahul Dholakia in 2020.

Principal photography began on 5 April 2021 but due to COVID-19 pandemic lockdown it was delayed. Finally filming was wrapped up on 9 November. The film was shot on Lord’s Cricket Ground in London, and across domestic and international locations to bring real feel of actual events that happened in Mithali’s life.

On 3 December coinciding with birthday of Mithali Raj releasing a teaser poster the producer announced the release date of the film as 15 July, 2022.

The Taapsee Pannu-starrer biopic of cricketer Mithali Raj has rare moments of humanity but is otherwise just another loud sports biopic.

Shabaash Mithu is, in many ways, the movie you expect. Another loud, unsubtle sports biopic that lives in service of underlining its heavy-handed underdog message. But somewhere within its shrill mainstream grammar, there is also a quieter, more intimate human drama.

The Taapsee Pannu-starrer (I think she’s now contractually obligated to lead any movie that’s even loosely sports related) tells the story of recently retired Indian cricket captain Mithali Raj. Her 23-year-long career is riddled with accolades and achievements, including breaking the world record for highest individual Test score at the age of 19 and serving as the first Indian captain to lead the country to two World Cup finals. Shabaash Mithu tells her story, using her journey to highlight the hardship and uphill battle that is women’s cricket in India.

The first, and arguably most memorable, leg of the film introduces us to a young Mithali Raj (Inayat Verma) and the friendship she strikes with her firecracker of a friend Noori (a wonderfully commanding Kasturi Jagnam). Noori introduces her to cricket, recognises her talent, and enables her to become the MC Sher to her Murad. The two start playing the game in secret (because of course, the girls aren’t allowed to play with the boys) until they’re discovered by the local cricket coach Sampath Sir (Vijay Raaz always understands the assignment, here bringing his token hardened wisdom).

The loud pitch of Srijit Mukherji’s film announces itself from the very first moments. Srijit makes films that scream at you (Begum Jaan). Every emotional beat is stated, restated, and underlined. But during these early portions of the narrative, the sentiment shines through the screeching. I liked that Priya Aven’s screenplay keeps the cricket secondary and instead focuses on the touching friendship between two girls, for a considerable stretch.

But, of course, before long we get our time jump. Seven years pass and Mithali has now grown into Taapsee Pannu. (For much of this film, Taapsee is supposed to be a 16-year-old which you don’t buy into even for a second. But it holds if you forget that detail). Mithali gets selected for the national camp, but her celebration is short-lived as she realises it’s not all she hoped it would be. For one, she’s not exactly welcomed by her fellow players who see her as young and inexperienced. She also learns the hard way that finally making it to the big leagues of women’s cricket isn’t the culmination of a struggle, but merely the beginning of one. The start of a lifelong battle to be seen, acknowledged and taken seriously.

It’s here where Shabaash Mithu is at its most potent and substantial. Where it rises above its harsh, heavy-handed packaging and gives us traces of a more intimate drama about a young girl coming into her own and navigating the struggles of finding her voice amongst her new teammates. (Mukesh Chhabra’s casting magic gives us a team peppered with fine performances, a scene-stealing Sampa Mandal as Neelu in particular). Here the film is allowed to breathe and for a time, be, before it becomes burdened by the pressures of her legacy and possessed by rushing to the next tick box achievement. There’s a stillness in this stretch of the narrative that I was taken by, where Mithali is given the freedom to be unremarkable and human, before she becomes the leader forced to confront sexist men in boardrooms. Equally, it’s where Taapsee shines brightest. Where she’s comfortable trying to fit in rather than needing to stand out as she navigates Mithali’s quiet struggle.

But the quiet doesn’t last as we jump to an overlong second half that rapidly flails its way into becoming the clunky, bland highlights reel of Mithali’s achievements that we’ve come to expect from sports biopics. The sincere origin story gives way to contrived success story. The focused internal gets drowned out in the showy, diluted external. Following a dramatic confrontation with a group of overtly sexist cricket officials (led by who else but Brijenda Kala, in an impactful scene and one of the few which is awarded a silence, without the overpowering background score), Mithali temporarily leaves the team. (I couldn’t tell if she was fired or thrown out).

From here on Shabaash Mithu has little left to say. I found myself scrambling to try and find a way back into the film. Worse still, is the culminating World Cup montage, which is among the laziest, most unimaginative final sequences of any sports film in recent memory. A blurry, bloated, repetitive reel made up of footage of the actual matches with the actors CGI’d in. After a point, it becomes a hypnotic rhythm on loop: TV footage – wicket taken – reaction shot by one of the cast. Rinse and repeat. I couldn’t even tell how much time had passed.

Not to mention all the inevitable cringe-inducing scenes along the way – a journalist asking Mithali who her male favourite cricketer is at a press conference, an uncle at a sports bar asking the bartender to change the channel because who wants to watch Indian cricket, and so on. Also, why do sports dramas feel the need to invent villains, especially here where there’s no lack of obstacles in the journey of women cricketers? In this case, it’s Mithali’s ex-teammate-turned-coach Sukumari, who’s hellbent on sabotaging Mithali’s career through the film. Shabaash Mithu also supposedly takes place over a span of 20 years but you barely feel the passage of time with an impressively lazy job done of aging Taapsee and the wider cast. Her mother (Devadarshini), in particular, remains the same right through.

But for all its harshness, it’s a film that gave me a sense of journey. During the final moments of Shabaas Mithu, we see Mithali and her team overrun by a horde of young girls begging for their autographs, to the gentle anthem of Amit Trivedi’s Hindustan Meri Jaan. It’s manipulative and conventional but I was overcome by every beat of it. Athletes and achievers finally acknowledged. Finally seen.