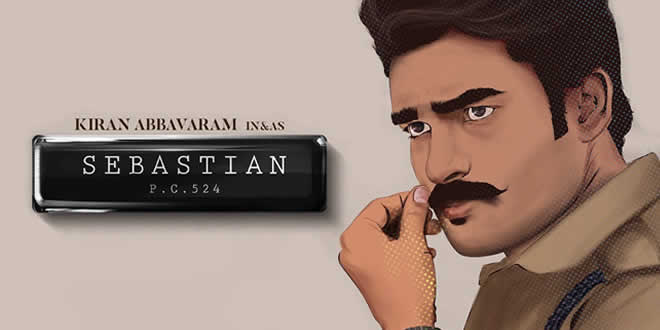 Sebastian PC 524 is an upcoming Indian Telugu-language action thriller film written and directed by Balaji Sayyapureddy. The film stars Kiran Abbavaram and Nuveksha in the lead roles. The film is produced by Siddha Reddy B, Raju, Pramod under the banner Jovitha Cinemas. The film’s soundtrack is composed by Ghibran and the editing is done by Viplav Nyshadam.

The film is scheduled to be theatrically released on 4 March 2022.

The film was launched with a pooja ceremony on December 1, 2021. Filming took place in Madanapalle in Andhra Pradesh and was shot in 32 days.

The film is scheduled to be released on 4 March 2022. Initially, the release date was 25 February, but was pushed back by a week in order to avoid clash with Bheemla Nayak.

Being a bilingual movie, ‘Sebastian P.C. 524’ is to be released in Telugu and Tamil simultaneously. It is also reported that the makers are preparing to release the teaser for the movie so as to kick-start the promotions.

Sebastian (Kiran Abbavaram), who has been suffering from night blindness, vows to his mother (Rohini) that he would not tell anyone about his issue, not even to his bosses. He gets transferred frequently as he caught on ‘sleeping’ on the night on duty. Finally, he is posted to Madanapalle, his native place.

Even in Madanapalle, he tells no one about his problem and continues to do his job. One night, he lands in trouble as he is assigned to guard the police station when the staff goes outstation. Fearing being alone in the night, he closes all doors and windows of the station and takes no calls. The next day, he comes to know the murder of a housewife Neelima (Komalee Prasad).

Sebastian believes that either of the three suspects – the victim’s former lover, her father-in-law, and another girl – could be the murderer. He becomes obsessed with the case. Why? Can he catch the murderer?

‘Sebastian PC 524’ is about a police constable who suffers from night blindness and deals with a murder investigation. The film begins with the hero’s struggles to keep his night blindness a secret and his attempts to manage his police duty when night shifts happen. Why he is determined to keep his job at any cost and his mother’s role in shaping his life and thinking process is established in the first act.

Just before the interval, the movie turns quite engaging as all characters got introduced and the main point is established, there is an intriguing angle about the protagonist as well. As we get ready for a riveting thriller in the second half, the director shifts gears. He puts focus on the hero’s guilt. His guilt of not saving a woman on the night consumes the hero, and he becomes obsessive about solving the case even after a local court dismisses the case on the grounds of lack of evidence. Subsequently, the film takes a different turn. This meandering has spoiled it.

Komalee Prasad and Surya’s thread is hard to digest.

The director misses the opportunity to weave an engaging thriller, with ineffective writing in the second half.

Kiran Abbavaram gives a believable performance. He shoulders the entire film. Kiran’s acting in pre-interval sequences is absolutely good. Rohini as his mother and Srikanth Iyengar also put up good performances. Nuveksha’s is not a typical ‘heroine’ role. Komalee Prasad as a housewife is okay.

The film has decent output from the technicians.

Kiran Abbavaram starrer ‘Sebastian PC 524’ is an investigative thriller. It has an engaging mid-portion, but the later portions should have been effective.