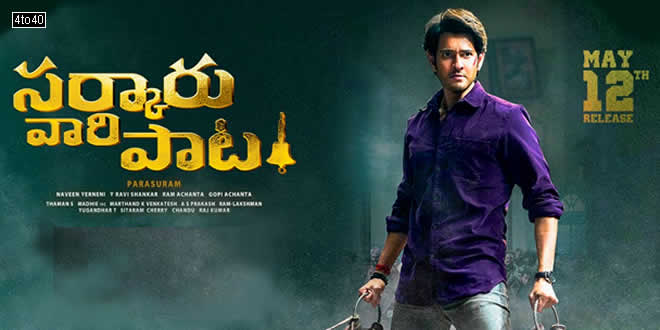 Themes of banking scams which took place in the country.

The film was announced in May 2020 with a formal launch ceremony taking place in November 2020. Principal photography was commenced in January 2021 in Dubai. The production moved to Hyderabad but was put on hold in April 2021 due to the COVID-19 pandemic. Filming resumed in July 2021 and took place in Goa and Spain before being concluded in April 2022. The film’s score and soundtrack is composed by S. Thaman with cinematography and editing performed by R. Madhi and Marthand K. Venkatesh respectively.

Sarkaru Vaari Paata was initially scheduled to release on 13 January 2022 but was deferred due to the pandemic and production delays. It is now scheduled to be theatrically released on 12 May 2022.

Following the success of Geetha Govindam (2018), the film’s director Parasuram narrated a script to Mahesh Babu. Later, Parasuram began working on the Naga Chaitanya-starrer Nageshwara Rao. The filming was delayed due to the COVID-19 pandemic, leading Parasuram to re-visit Babu’s film. The project was officially confirmed during late-April 2020, with the Parasuram stating it as a “dream come true” moment on directing Babu. Mythri Movie Makers and 14 Reels Plus in collaboration with Babu’s home banner, G. Mahesh Babu Entertainment jointly funded the project. On 31 May 2020, on the occasion of Babu’s father Krishna’s birthday, the makers officially announced the project with the film being titled as Sarkaru Vaari Paata.

S. Thaman was signed to compose the music for the film in his fourth collaboration with Babu. The technical team of the film consists of cinematographer P. S. Vinod, editor Marthand K. Venkatesh and production designer A. S. Prakash. Vinod was eventually replaced by R. Madhi as the cinematographer, as he opted out due to schedule conflicts. In April 2020, Kannada actor Upendra entered the talks to play a crucial role but it did not materialize. In June, Kiara Advani and Saiee Manjrekar were initially considered as the lead actress. However, in October, Keerthy Suresh was confirmed to play a lead role. In January 2021, Vennela Kishore and Subbaraju joined the production. Tamil actor Samuthirakani was signed to play a pivotal role, and joined the film’s production in September 2021.

In September 2020, Parasuram and his team went to United States, for a location scouting, in order to shoot the film. A formal launch event was held in Hyderabad on 21 November 2020, with the film’s shooting might commence from 1 January 2021, and will be primarily shot at United States, Hyderabad and Dubai. However, principal shooting began on 25 January 2021 at Dubai.

The first filming schedule took place for four weeks at Mleiha (Sharjah), and was completed on 21 February 2021. The second schedule of the film commenced on 13 April 2021 in Hyderabad where two crucial scenes were planned to be shot. But, on 20 April, it was reported that the film’s shooting being stalled after six crew members were tested positive for COVID-19. Shooting further delayed after night curfew and several restrictions being announced in Andhra Pradesh and Telangana, to control the rise in COVID-19 cases. The filming resumed in July 2021 in Hyderabad, where scenes featuring Babu and Suresh were shot for a month-long schedule. On 14 August 2021, the film’s team headed to Goa for a primary schedule which consisted fight scenes choreographed by Ram Lakshman duo. In October 2021, a schedule took place in Spain and was wrapped up by the first week of November.

Shoot of the film was halted as Babu underwent a knee surgery. A schedule was planned in January 2022 but was delayed as Babu tested positive for COVID-19. Final schedule of the film began in March 2022, at the Aluminum factory in Hyderabad. Action sequences in the climax featuring Babu were shot in this schedule. The shoot was completed in late April 2022.

The music is composed by S. Thaman, collaborating with Mahesh Babu for the fourth time after Aagadu, Businessman and Dookudu and with Parasuram for the third time after Anjaneyulu and Srirastu Subhamastu. The audio rights were acquired by Saregama. Music production of the film’s soundtrack and score began on 20 September 2021. The first single titled “Kalaavathi” was sung by Sid Sriram and it was scheduled to be released on 14 February 2022 coinciding with Valentine’s Day but it was later preponed and released on 13 February 2022 due to the song being leaked the day before. The second single titled “Penny” was sung by Nakash Aziz and it was released on 20 March 2022.

Sarkaru Vaari Paata is the kind of film that works when it lets Mahesh Babu have a lot of fun with his character. It pretty much maintains the same tone throughout the movie but in the few moments when it wants to be taken seriously, does it falter . Parasuram isn’t the kind of filmmaker from whom you can expect sensitivity, and it reflects in the way he presents Keerthy Suresh’s character. Here’s a filmmaker who knows his target audience and he delivers just the kind of film they’d expect.

Mahesh Babu plays Mahesh, who loses his parents at a young age after they die by suicide failing to repay a loan of Rs. 15,000. Cut to many years later, Mahesh has set up a loan agency in the US, and he’d turn the world upside down if his debtors don’t pay up interest on time. Keerthy Suresh plays Kalaavathi, who is addicted to gambling and has borrowed beyond her capacity. When she meets Mahesh, she tricks him into loaning her $10,000 but eventually gets caught. When confronted to repay the loan, she threatens Mahesh by using the influence of her father Rajendranath (Samuthirakani), a corrupt and ruthless businessman. Mahesh travels to India to get his money back at any cost from Rajendranath, and in turn, earns his wrath. When the matter grabs the attention of the media, Mahesh reveals that Rajendranath owes him Rs. 10,000 crore much to everybody’s astonishment. The rest of the film is about the truth behind the Rs. 10,000 crore loan.

One thing that really works in favour of the film is Mahesh Babu’s refreshingly different character. To see him shed his sophisticated image and play a character that has an impeccable sense of humour without any inhibitions and nail it is just what his fans needed. Parasuram doesn’t disappoint in the way he writes and presents Mahesh’s character. Unfortunately, the same can’t be said about Keerthy’s character that’s so poorly written, and is totally without any purpose. Here’s a film that’s headlined by one of the biggest stars of Telugu cinema and it has him mouth a line about stalking a woman as ‘a boy thing’. If you overlook the heroine’s character, we get a film that pretty much checks all the boxes of a commercial entertainer. Mahesh Babu shoulders the film single-handedly, and he does a very satisfying job of anchoring the film even during its dullest segments.

Sarkaru Vaari Paata tries to shine the spotlight on bank loan scams and how the government lets down its own people when it turns a blind eye on those who’ve borrowed thousands of crores and failed to repay. The messaging works as long as the film’s narrative doesn’t get serious, but when it gets into lecturing the audiences, it gets slightly tiring to sit through. Parasuram does manage to keep the film largely entertaining, and even during the slightly sluggish second half, you get moments that hold the film together.