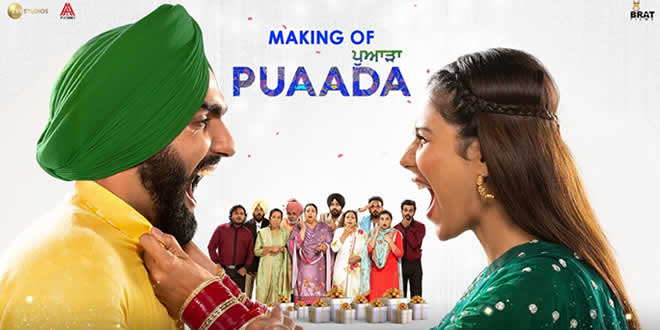 Puaada is a 2021 Indian Punjabi-language romantic comedy film directed by Rupinder Chahal for A&A Pictures and Brat Films. Starring Ammy Virk and Sonam Bajwa, the film follows the love story of a Punjabi village boy, running a dairy farm and is in a relationship with Raunak, an air force officer’s daughter. It was scheduled to be released theatrically by Zee Studios on 2 April 2021, but due to cases in COVID-19 pandemic, the release date was postponed. The film was released theatrically on 12 August 2021 to coincide with Independence day week in India.

On box office currently, the film has grossed ₹17.40 crore (US$2.4 million) worldwide. It is a commercial hit in the state of Punjab in India.

Puaada (Conflict/Quarrel) revolves around a lovable and exuberant man from Punjab, Jaggi Ammy Virk and the mesmerizing girl next door, Raunak Sonam Bajwa. Jaggi is a farmer and supplies dairy to every family in his hometown. One such family is Raunak’s whose father is an Air Force Officer. Jaggi and Raunak are in a relationship and decide to confess their love to their parents but Raunak’s father disapproves of their relationship as he wanted a groom to be educated and be in the armed forces like him, and Jaggi’s mom disapproves as she wants a simple village girl for her son. The families eventually agree to meet but the twist in the tale comes when Jaggi pulls away unexpectedly. This results in a Puaada (conflict/quarrel) between Jaggi and Raunak and their families, leading to hilarious situations. Puaada is a complete family romance comedy of errors, an entertainer where Jaggi and Raunak must rise above all to save their relationship and get everyone, including themselves out of this Puaada.

The film was announced in March 2019 with Ammy Virk And Sonam Bajwa. In December 2019, it was reported that Ammy Virk and Sonam Bajwa are paired in a romantic comedy, making it their fourth film together after Nikka Zaildar, Nikka Zaildar 2 and Muklawa. The filming was in progress, and it was slated to release on 12 June 2020, when due to COVID-19 pandemic the shooting was postponed. On 18 January 2021, the producers of the film announced release date in March 2021, claiming it as the first Punjabi film to be released post COVID-19 pandemic. The release date was later changed to 2 April 2021 to coincide with Good Friday holidays.

The film was released theatrically on 12 August 2021 to coincide with Independence day week in India.

The film was released on ZEE5 on 17 September 2021 for home audience.

Troy Ribeiro of IANS rated the film with 3.5 stars out of 5 and praised the performance of Ammy Virk, Sonam Bajwa and supporting cast. He felt that the characters were over-the-top at times, but attributed it to Punjabi lifestyle. He wrote that narrative of the film is simple with full of wit and humour. He praised Rakesh Dhawan for dialogues and screenplay. He liked the music of the film specially mentioning the song “Aaye hai jattiye kamaal”. Ribeiro liked humorous climax and concluded, “Overall, Puaada is a complete entertainer that transports you to Punjab and Jaggi’s life for the entire duration and keeps you involved.”