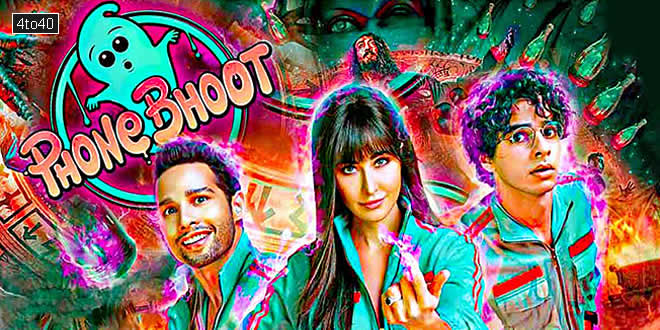 A horror comedy that follows a shop with ghost busting services.

Phone Bhoot is an upcoming Indian Hindi-language horror comedy film directed by Gurmeet Singh and produced by Farhan Akhtar and Ritesh Sidhwani under the banner of Excel Entertainment. The film stars Katrina Kaif, Ishaan Khattar, and Siddhant Chaturvedi. The Principal photography commenced on 12 December 2020 in Mumbai.

The film revolves around a shop, where every kind of problems involving ghosts is solved.

Just short of fun: The film Phone Bhoot has some intelligent twists, but the writers don’t always succeed in their bid to strike a funny chord

Wacky and spooky, this tale of horror buffs turned ghost-busters aims high. Sure, it treads an unusual and amusing ground. Two good for nothing youngsters Gully (Ishan Khatter) and Major are trying to make a living out of their passion for horror, evident in their apartment and their paishachik pursuits.

An encounter with beautiful and friendly ghost Ragini (Katrina Kaif) sets them on the path to earn mega-bucks, bust ghosts and even score brownie points on humanitarian report card. Funny or illogical! Any movie that moves into the supernatural genre is not meant to be taken seriously or measured on the yardstick of rationale.

Phone Bhoot joins the stable of horror comedy, a genre that gave us delightful Stree four years ago and super-hit Bhool Bhulaiyaa 2. Only, here the idea is primarily to tickle your funny bone and not make shivers run down the spine. Horror is only an aside, just a backgrounder in which ghosts of all sizes, races and region dwell. More so since this one is coming from the makers of Fukrey, it has one point agenda—to make you laugh. So be it….Who minds a good laugh? Of course, it takes a while for the fun quotient to get going. But once things get rolling, especially after the best buddies’ rather bizarre idea of setting up Phone Bhoot fructifies, makes you chuckle if not laugh wholeheartedly.

More than one-liner is an acknowledgment of Bollywood films right from Ramsey productions and actors. With Jackie Shroff playing tantric Atmaram, a whole scene reminds you of his Hero days. ‘Hero since 1983’… He declares unabashedly and grandiosely. Only here he is a baddie who entraps ghosts, makes them do his bidding and in the name of moksha traps them in bottles. Expectedly, there will be a face-off with our good Samaritans ghost-busters, especially as our lovely Ragini has a love-story stowed away in her ghostly past. The final denouement matters little here. What does is the path it takes. Sure it’s a crazy one.

Among other madcap antics, we see a Tamilian ghost tamed with the photograph of Rajinkanth and a Punjabi dayan made to groove to Punjabi beats. Sadly, what could have been a laugh riot falls way short. It’s not as if Phone Bhoot is outright unfunny. There are intelligent twists, not just in the title but also some Hollywood dialogues.

Like the famous one ‘with great power comes great responsibility’ gets transformed into…‘With great power comes great danger’. But, the biggest undoing is that the writers (Ravi Shankaran and Jasvinder Singh Bath) try too hard to amuse you and go in an overdrive to churn out rib-tickling lines with cross references. No wonder they succeed now and then. Sure, the chemistry between Siddhant Chaturvedi and Ishaan Khatter energises the proceedings and the atmospherics.

Ishaan delivers with perfect comic timing and panache. Katrina brings the necessary lustre and Jackie proves he hasn’t lost any of his. The film could have shone bright, only if it were not too caught up in its overzealousness to strike a funny chord. Watch it if you are amused easily and laughter comes naturally.