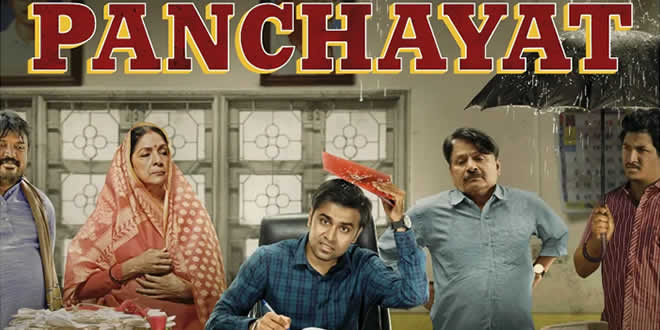 A comedy-drama, which captures the journey of an engineering graduate Abhishek, who for lack of a better job option joins as secretary of a Panchayat office in a remote village of Uttar Pradesh.

Panchayat is an Indian comedy-drama web television series on Amazon Prime Video produced by TVF, which captures the journey of an engineering graduate Abhishek Tripathi, who for lack of a better job option joins as secretary of a panchayat office in the remote village of Phulera, Uttar Pradesh, India. Stuck between crazy villagers and a difficult village lifestyle Abhishek starts his job with the sole motivation of getting out of there as soon as possible, for which he even prepares for the Common Admission Test.

This critically acclaimed web series revolves around a Panchayat of a village called Phulera in Ballia district of Uttar Pradesh. The series features Jitendra Kumar, Raghubir Yadav and Neena Gupta.

Frustrated by the lack of night life in the village, Abhishek decides to drink beer but forgets to lock the door and finds his monitor stolen from panchayat office the next morning. A furious Pradhan reprimands Abhishek for being careless and asks him to find a new accommodation. Abhiskek and Prahlad lodge an FIR at the local police station. A police officer arrives later at the panchayat office and suspects Abhishek of stealing the monitor for money. The officer along with Pradhan and others interrogate an irritated Abhishek who then explains his frustration because of his village routine and lonely life. Abhishek’s outburst convinces Pradhan of his innocence. That night, Pradhan arranges a party along with Prahlad and Vikas to cheer Abhishek up. The next day morning, Abhishek finds his stolen monitor returned, with a note.

The series was received very well by critics and audience alike, specially for its simple yet fun presentation and realistic characterizations.

Recall a sharp and suave Shah Rukh Khan leaving his comfortable and rewarding NASA job to come back to his motherland and serve his own people in Swades? 16 years later, Jitendra Kumar lands in a village to take up the government job at a panchayat, but his reasons are far less patriotic, at least in the beginning. He is neither as intelligent as SRK’s Mohan Bhargav nor is he bidding goodbye to a rewarding career. However, this rural drama is as compelling as the Ashutosh Gowariker creation, with a lot of humour thrown in.

Say ‘panchayat’ and what comes to the mind is the social science chapter about an evergreen tree and a sarpanch in its shade with the villagers in attendance. It’s time to unlearn those dated lessons and get an updated picture of a modern village where the problems are far quirkier than just land disputes and child marriages. The Amazon Prime Video series created by TVF brings to the urban audience a hardly ever seen picture of a village panchayat run by an unofficial pradhan pati – well, husband of a pradhan is a pradhan himself, not by law but by logic.

Meet Neena Gupta, the elected pradhan of a village in the Balia district of Uttar Pradesh, who is pradhan simply because the seat was made reserved for women, disqualifying her husband due to his gender. While she’s the pradhan on paper, the entire village has happily made its peace with her husband (Raghubir Yadav) being the one in power. Ignorance is bliss for this uneducated homemaker who is only bothered about her daughter’s marriage and prefers to call the shots at home but hands over the reins of the panchayat office to the man of the house.

Enters Jitendra Kumar, a living example of why one should work hard in high school to not end up with a dead-end job like his. As his corporate buddy parties the night away every Friday, he is charging emergency lights and killing mosquitoes. It’s a shame how we see the village from the eyes of Jitendra and burst into laughter during situations which will hardly amuse a common villager. There is no dull moment as the duties of a panchayat secretary — from making birth certificates to implementation of government policies like MNREGA and family planning — are shown in the most hilarious manner possible. From addressing grassroot corruption, dowry culture to the birth of a blind belief, the show presents some never seen before aspects of a panchayat in the most light-hearted manner.

The 8-episode series moves at its own pace, just like the mundane life of a village where lights go out soon after sunset. There is no extra effort to carve a hero figure out of the modern-day bachelor (Jitendra) who won’t move an inch to help the needy. One thing that definitely catches the eye is the camera work. The aerial shots and low angles add a magical touch to the cinematography, which could otherwise look dull and faded amid the empty fields and irregular skyline.

The planning that goes into the making of an original socially relevant comedy is clearly visible. The moment Raghubir Yadav’s phone rings to Rinkiya Ke Papa, you are paying as much attention as the actor himself. These little touches add mood to the series.

The character arc of Neena Gupta’s Manju Devi is worth applause. Jitendra steps into rural space for the first time and looks as bewildered as his character. His resilience is sometimes heartbreaking as he holds back his deep-embedded frustration for the sake of a government job. Raghubir is the life of the party and again re-emphasises that experience and talent will tell.

Panchayat is a perfect example that what you really need to make a series sing is a solid script. If you are looking for something beyond the good old Ramayan and Mahabharat during lockdown, Panchayat should definitely be on your must-watch list.