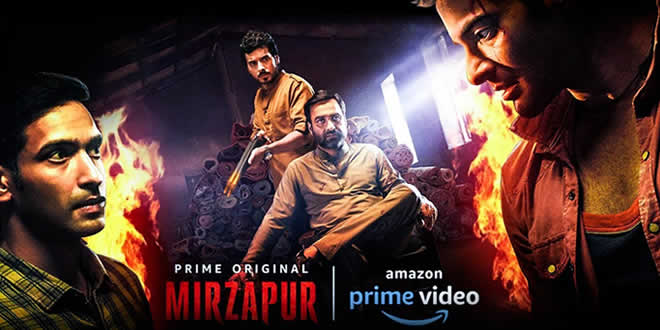 Mirzapur is an Indian crime thriller web television series on Amazon Prime Video produced by Excel Entertainment. The series is primarily shot in Mirzapur, with some shots in Jaunpur, Azamgarh, Ghazipur, Lucknow and Gorakhpur. It revolves around drugs, guns and lawlessness. It depicts the putrescence, governance and rule of mafia dons and the rivalry and crime prevailing in the Purvanchal region of Uttar Pradesh. Its first season consists of 9 episodes in total. The series has been renewed for a second season which will release in 2020.

A shocking incident at a wedding procession ignites a series of events entangling the lives of two families in the lawless city of Mirzapur.

Despite a dependably brilliant Pankaj Tripathi, Amazon’s needlessly violent Anurag Kashyap rip-off has the maturity of an ill-mannered teen – loud, obnoxious and aimless.

‘Bhaiya’ is a loaded word in the Hindi language. In its most literal state, it means ‘big brother’. But depending on where you are in India – especially in Mirzapur – its interpretation could vastly vary. In the northern part of the country, it is used (and accepted) as a term of mild respect. We call autowallahs ‘bhaiya’ and we call our actual brothers ‘bhaiya’. The man who delivers your Amazon package is ‘bhaiya’ and so is your local shopkeeper.

But head further south and you’d find – particularly in a few states – that calling someone ‘bhaiya’ would be akin to insulting their sister, and then setting their home on fire. These derogatory undertones were attached to the word even in Maharashtra, where immigrants from states such as Bihar or Uttar Pradesh were addressed as such for some time.

Virtually every character in Mirzapur, the new Indian series on Amazon Prime Video – spearheaded by the same team that produced its first – has the word ‘bhaiya’ attached to their name. And in a convenient example of the sort of nuances I am referring to, no two characters’ ‘bhaiya’ bears the same level of respect.

Mirzapur is set in UP, the north Indian state infamous for violence of both the communal and physical kind. It was recently reported by the Times of India that eight women on an average are raped everyday in the state. The same report said that more than 11,000 FIRs related to crimes against women are registered every year.

The ensemble cast of characters in Mirzapur is comprised almost entirely of psychopaths. There’s Kaleen Bhaiya, a local crime lord played by the great Pankaj Tripathi, and his hot-headed son, Munna Bhaiya (Divyendu Sharma). Their dynamic is similar to the one shared by Tripathi’s character and his son in the fabulous Neo-noir, Gurgaon. And then there are the brothers Guddu and Bablu, played by Ali Fazal and Vikrant Massey – both of whom are in form as the aspirational sons of a local (and crucially) straight-laced lawyer. Kaleen Bhaiya sees them as the perfect balance of brains and brawn, and sensing potential, hires them to join his gun-running operation, much to the jealousy of the deeply unhinged Munna, and the dismay of their father.

Mirzapur tells a tale of Hindi heartland violence that intersects between the world of politics, of law enforcement, and of middle class India. It unfolds with almost zero nuance, and has a death count that would put Liam Neeson’s Taken character to shame.

Under more assured hands, this is a story that would have made for a poignant and timely dissection, but sadly, Mirzapur has neither the intelligence nor the empathy to make any sort of meaningful statement about this very real, and very upsetting reality. Instead, it makes the most egregious mistake of glorifying certain aspects of UP gangland culture. Even before the opening credits have rolled in episode one, a gang of goons in their Scorpio (a brand of vehicle whose reputation has been permanently damaged by the hoodlums who like to drive it, just like the soup Toyota’s in for inadvertently producing cars that appeal to terrorists), drive over a severed finger. A man’s gun backfires and decimates his dominant hand. And a groom perched atop his ‘ghodi’ is mistakenly shot in the eye.

All this happens within the first 10 minutes. The rest of the nine episodes seem to suggest, with frightening nihilism, that being bad is good. Everyone is corruptible when enough money is dangled before their faces, and since there’s no point in standing up for what is right, one might as well make some money doing what is wrong.

Mirzapur is a show without a moral centre, which is problematic – not only ethically, but narratively. Without a single character to latch on to, the show is left with no option but to revel in the violence, which is often needlessly over-the-top. In a rare example of visual flamboyance, blood spatters on the camera lens every time someone slits a throat, pops a vein, or empties a clip into an innocent civilian.

But that’s sort of the tone the show settles into. Everything is taken to an extreme – every emotion, every line of dialogue and every scene. Once, when a goon expresses a desire to do some drugs, he ends up doing all of them. Lines of coke are snorted, joints are rolled and heroin mainlined. And yet, the ‘bhaiya’ lives.

But doing three different drugs in one sitting is emblematic of Mirzapur as a show. It’s gives the impression of having been directed by a first-timer; someone who’s overjoyed at the opportunity, overflowing with cinematic knowledge, and terrified of not getting a second chance. So they pile all their eggs into one ‘thali’. It’s abundantly clear that directors Karan Anshuman and Gurmeet Singh have consumed an unhealthy amount of Anurag Kashyap’s films — the cultural impact of his Gangs of Wasseypur movies is often overlooked. A scene in the show, set inside a movie theatre, will even remind some of you of that AIB sketch.

But Mirzapur has none of the flair of a Kashyap joint; the dialogue has none of the poetry, there is no glint in its eye, only the rusty smell of a ‘desi katta’ hanging damply in the air.

And while Kashyap’s Netflix show, Sacred Games – he co-directed the first season with Vikramaditya Motwane – was always intended for a global audience, Mirzapur, it seems, is aimed mostly at a local crowd. Certainly, that’s where its sensibilities lie.

Both shows share actors Rajesh Tailang, who will appear in Netflix’s Selection Day soon, and Pankaj Tripathi, who is, as he often tends to be, the best thing about whichever project he associates himself with. Some of his scenes are jarringly unbalanced because of his formidable skills, and his co-actors’ inevitable inability to keep up with him. Together with Rasika Dugal, whom we last saw in Manto, their on screen battles of wit and power are easily the highlight of this otherwise very familiar show.

Mirzapur doesn’t aim high, and yet it fails to hit its target. A more mature approach to the violence and a more focused plot would greatly benefit the second season, were there to be one. They should probably hurry, because the way things are going in UP, Mirzapur might need to be retitled.