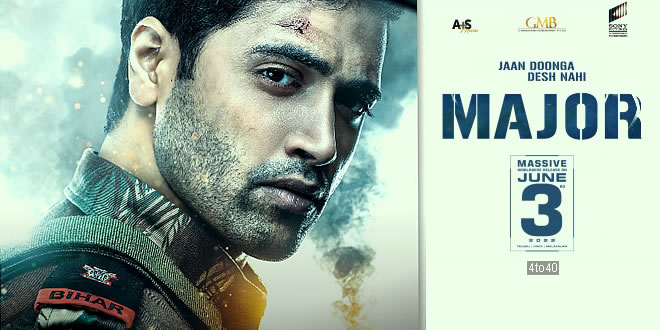 Based on the life of Major Sandeep Unnikrishnan, who was martyred in action during the November 2008 Mumbai attacks and was consequently awarded the Ashoka Chakra, India’s highest peacetime gallantry award, on 26 January 2009.

Major is a 2022 Indian biographical action film directed by Sashi Kiran Tikka and produced by Sony Pictures International Productions, G. Mahesh Babu Entertainment, and A+S Movies. Shot simultaneously in Telugu and Hindi languages, the film is based on the life Major Sandeep Unnikrishnan, an army officer who was martyred in the 2008 Mumbai attacks. Adivi Sesh (in his Hindi film debut) portrays Major Sandeep, the title character, in addition to writing the script.

The principal photography began in February 2020 and ended in December 2021. The shoot experienced delays due to the COVID-19 pandemic. It was shot in 120 days and was filmed in over 75 locations. Major is scheduled to be released worldwide on 3 June 2022 in Telugu, Hindi and Malayalam languages.

Major portrays the life of Major Sandeep Unnikrishnan from his childhood to commanding officer of the Operation Black Tornado and depicts the risk taken by Sandeep Unnikrishnan and several Indian soldiers to save the lives of numerous hostages in the Taj Mahal Palace Hotel in Mumbai on November 26, 2008 during the 2008 Mumbai attacks

The film was announced in February 2019, with Adivi Sesh in the lead role. The film is produced by actor Mahesh Babu under his studio G. Mahesh Babu Entertainment, in a collaboration with Sony Pictures International Productions and A+S Movies.

Principal photography began in February 2020. But the filming was put on hold in March 2020 due to the COVID-19 pandemic in India. By September 2020, more than 50% of the film had been shot, and further shooting is planned to take place in Hyderabad in October 2020. Sobhita Dhulipala filming completed her portions in November 2020.

In August 2021, Sesh began filming the final schedule of the film. In December 2021, the shooting of the film was completed and the post-production work began with Sesh dubbing for the Hindi version.

Major was shot in 120 days and was filmed in over 75 locations.

Major is scheduled to be released theatrically on 3 June 2022 in Telugu and Hindi languages, along with the dubbed version in Malayalam. Earlier, it was supposed to release on 2 July 2021 but was deferred to the COVID-19 pandemic. Later, the release was re-scheduled as 11 February 2022, but the release date was postponed due to uncertainty prevailing about the reopening of cinemas due to the Omicron variant spread. Later in February 2022, the film was re-scheduled to release on 27 May 2022 before being pushed back to 3 June. The film will release on 3 June 2022 in Hindi, Telugu and dubbed version of Malayalam language.

Major is not the first film to be made on the 26/11 terror attacks in Mumbai, which turned the city into a war zone. However, what differentiates it from the other movies is its focuses on the life of late Major Sandeep Unnikrishnan – played to a tee by Adivi Sesh – who sacrificed his life, while fighting terrorists and rescuing 14 hostages in the Taj Mahal Hotel. This is a powerful story of a fallen hero, whose sacrifice effectively answers the film’s core point – what does it mean to be a soldier?

Based on the life of the 26/11 hero Sandeep Unnikrishnan, the films stars Adivi Sesh, Saiee Manjrekar, Murali Sharma, Prakash Raj and Revathi.

As much as Major is about the sacrifice of Major Sandeep Unnikrishnan, the film’s tender and likable moments lie in seeing him growing up – from a young boy who dreams of joining the Navy to realizing his love for the uniform, when he joins the Indian Army. It’s this initial phase that makes Major work more as a drama, than just as an action film about a patriot. The film has plenty of action, when the story shifts to the Taj Mahal Hotel. But the build-up to the terror attacks and how it allows Sandeep to transform from a young man to a fearless soldier makes it more real.

Despite its predictable plot, Major is a film with which you connect on an emotional level. The credit goes to Adivi Sesh, who has also co-written the film. He made sure this was not just another war movie with jingoism.

Sesh is terrific as Sandeep Unnikrishnan, and he slips into the role with a lot of conviction. The fact that he’s spent a lot of time developing and working on the story has allowed him to transform into Sandeep effortlessly. The moments involving Sandeep’s parents – played by Prakash Raj and Revathi – also work beautifully in the film’s crucial moments, especially towards the climax, which leaves you emotionally charged.