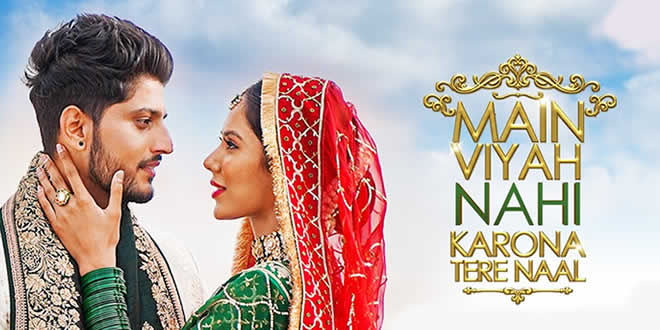 A Canadian YouTuber who visits Punjab for the first time and falls in love with a desi rooted girl from Punjab who eventually helps him discover his roots.

We all had high hopes from Gurnam Bhullar and Sonam Bajwa’s movie Main Viyah Nahi Karona Tere Naal, but expected it to be this adorable? Yes, it’s absolutely amazing and you’ll get to know more about it in this review. This movie had become the talk of the town immediately after it was announced and its trailer released, and when we have watched it now, we can conclude it was worth all the hype. No one in unaware of the lead stars of the movie i.e. Gurnam Bhullar and Sonam Bajwa, but a moment of appreciation needs to be specially taken out to applaud Rupinder Inderjit who directed them with utmost perfection.

Initiating with the story of the movie, as the genre, songs, and trailer suggests, it surely is a rom-com and is a worth watch due to various cute and adorable moments in it. It’s a story of a NRI guy Pooran (Gurnam Bhullar) from Canada, who doesn’t wish to get married, and especially with a desi girl, and on the other side, there is Mannat (Sonam Bajwa) as a typical, desi Punjabi girl from Punjab. These two being the lead characters of the movie somehow land together as their families fix their wedding. And how the story heads ahead and how this love triangle concludes is exactly what you need to watch the movie for. We aren’t going to spoil the fun by giving all the minor details about the story and plot, but read further to know more about the outline of the movie.

Undoubtedly there are various actors and characters in the movie, but Gurnam turns out to be the show stealer and we would write it once again that Gurnam Bhullar has proved to be the perfect husband material yet again. And excuse us if you believe we have upgraded the movie’s rating by half a star just because we are flattered by Gurnam’s cuteness. And as already mentioned in the title, the film is all about little adorable moments which you cannot miss. They’ll make you feel overwhelmed and a bit emotional. Though there are a handful of adorable moments we fell in love with, the one where Jatinder Kaur steals the moment and leaves you teary eyed. That one sequence of the film encodes a strong message of there is no age to fulfill your dreams and mark our words- you will love the moment.

We will suggest you to not the enter the theaters with the hope of finding logics and intellectual story in the film, as Main Viyah Nahi Karona Tere Naal is a very light on head kind of entertainer which will turn out to be a blissful watch experience for you, your friends and family. And the things which will enhance your watch experience are, the beautiful shots, well expressed emotions, little-cute dialogues, Gurnam’s English, and Sonam’s breath-taking beauty.

You must watch the movie for the mind boggling romantic chemistry between Gurnam and Sonam, its blissful background score, amazing playlist, and astonishing cinematography. Also, if you’re looking for something simple yet beautiful to watch, this movie deserves to be in your watchlist, and we guarantee you won’t leave the cinema halls disappointed.

But as per our expectations, there are some points which could have been taken better care of to make the movie a level up. And these points include the character of Gurnam as well. Undoubtedly, there are moments where he proves to be the perfect fit for the characters, but there were some points in the film, where Gurnam actually lost his accent as an NRI. Apart from this, we’d have loved it more if the second half of the movie was kept a little more crisp and grippy. Overall, we consider and conclude the movie as a must watch for those who are seeking for entertainment through a perfect blend of drama with a cute romantic story. And don’t judge or make any perceptions about the film by just watching it’s trailer, undoubtedly the trailer was amazing as well, but it is also a perfect example of, Picture Abhi Baaki Hai Mere Dost!