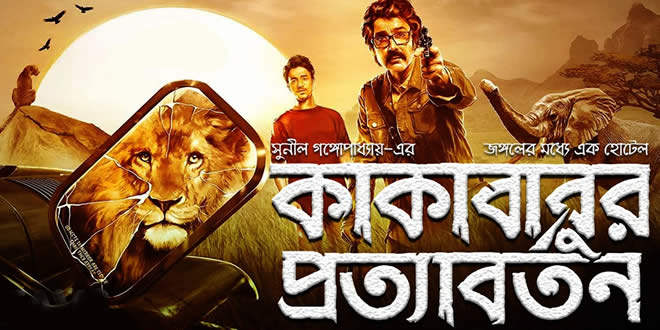 A famous hotel in Nairobi is about to close. People don’t go to that hotel like before. Kakababu and Santu go to the hotel to find out the reason.

Kakababur Protyaborton is an upcoming Bengali-language adventure drama film directed by Srijit Mukherji and produced by Shrikant Mohta and Mahendra Soni. It is based on a Bengali adventure novel of Sunil Gangopadhyay, Jongoler Modhye Ek Hotel. This film is released under the banner of Shree Venkatesh Films and this is the third film of Srijit’s Kakababu series after Mishawr Rawhoshyo and Yeti Obhijaan.

Raja Roy Chowdhury alias Kakababu and his nephew young Santu goes to Nairobi, Kenya for a relax trip. A Bengali couple Amal and Manju host them. In the meantime Kakababu receives threat call but he ignores as usual. An Africa-based Indian businessman Ashok Desai and his partner Mr. Ninjane invite Kakababu to visit their hotel at Maasai Mara forest. After an adventurous journey Kakababu and Santu reach the hotel inside the jungle. In the meantime Kakababu comes to learn from other sources that a few days earlier two German tourists mysteriously disappeared from the hotel. He enquires on it and faces a serious trouble.