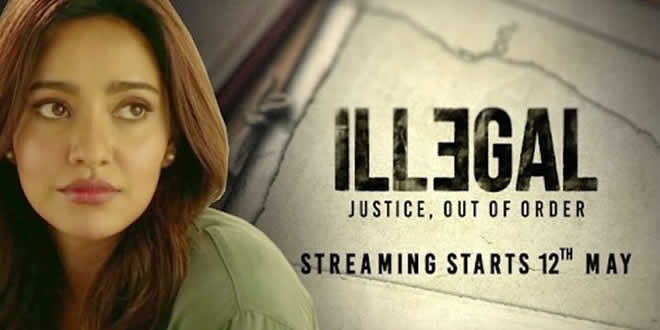 An idealistic lawyer is trapped in the murky world of criminal law. Two cases (one about the death penalty for women in India, the other about sexual harassment in the workplace) show how out of order the justice system can be.:

“Tareekh par Tareekh, tareekh par tareekh”, “Order order”, “Mujhe insaaf chahiye, judge sahab.” This is how the Indian audience is likely to remember courtroom dramas. But Sahir Raza directorial Illegal, a legal drama on Voot Select, is devoid of any such dramatic showdowns between the lawyer and the judge. It is the story of a budding lawyer Niharika (Neha Sharma), hired by a senior lawyer Janardhan Jaitley (Piyush Mishra), to work for him.

New to this profession, Niharika is passionate about amending capital punishment laws and getting the guilty punished by the book. On the other hand, Jaitley cares little about the law when the situation gets murky. Now, with a job to keep, Niharika is torn between her duty and conscience. Though this battle between right and wrong in the courtroom has been shown in countless dramas, Illegal is different. It delves into the personal lives of the lawyers and how their profession affects their mental well-being.

But, in an attempt to give sufficient time to the subplots, the makers shift focus from details too soon. For instance, it would have been interesting to watch the research sessions, with lawyers and clerks sifting through documents until they find just the right evidence to make their argument stronger (you know what I am talking about if you have watched the US TV drama Suits). Also, we get it that two characters have some secrets between them or some secret they are keeping from each other. But keeping secrets is not really that interesting. It’s the telling of secrets that makes for a better story.

However, the strength of Illegal lies in its characters. There are no weak characters. Be it Niharika, Jaitley, his son Akshay or opposition lawyer Puneet Tandon, all of them are far more complex than their words might indicate. Piyush Mishra playing Jaitley excels as a cold, self-assured and condescending man. Neha as Niharika is a revelation. It’s hard to believe she played a part in Crook, Kya Super Cool Hain Hum and Youngistaan.

In all, Illegal is a watchable web series, just don’t go in with the expectations of a Suits or Boston Legal. Meanwhile, the makers can focus on a crispier and detailed second season.

Illegal – Justice, Out of Order: Trailer