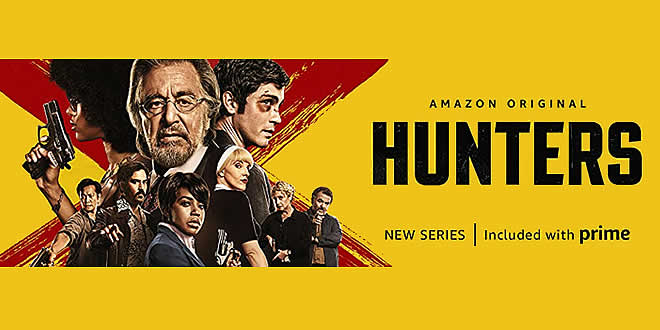 Hunters is an American drama web television series created by David Weil. It premiered on February 21, 2020, on Amazon Prime Video.

In 1977, in New York City, a troubled young Jewish man bent on revenge is taken in by a secret group of Nazi hunters fighting a clandestine war against the cabal of high-ranking Nazi officials in hiding who work to create the Fourth Reich.

The series is inspired by a number of real Nazi hunters through the decades, but it is not meant to be a specific representation of any of them. It follows a diverse band of Nazi hunters living in 1977 New York City who discover that Nazi war criminals are conspiring to create a Fourth Reich in the U.S. A parallel plot element is the discovery of Operation Paperclip, the U.S. government operation relocating many German scientists (many of them Nazis) to the U.S.

Remember how the Money Heist spoiler alerts have been doing the rounds ever since the series got viral? Well, Amazon Prime’s 10-episode outing, inspired by real life Nazi Hunters of the 1970s, can hardly fall prey to spoilers of the usual kind. Even if somebody were to reveal the ending, or connect the dots in the same sequence as they unfold. Starting from Maryland 1977, when a Sunday afternoon barbecue suddenly turns into a bloodshed, when Biff Simpson (Dylan Baker), the Under Secretary of State, is accused by his associate’s wife of being The Butcher, the Nazi, who slaughtered her whole family.

Well, within a few seconds we are given a peep into the psychology of the crime, “Thirty years of work that was, an entire life built, marrying that American pig, siring three tainted swine, how long I’d wanted to snap their little necks, leave it to the Jews to think only of their pathetic existence.” It’s a series you are likely to leave midway, not because it’s gory or boring but because it’s emotionally disturbing and psychologically scarring.

The reality of concentration camps is further depicted in a real way; so much so that we’re surprised the Hunters Challenge hasn’t become a hashtag yet. “You are worried about the world, the world is sure as heck, not worried about us,” so we are introduced to the nineteen-year-old Jewish boy Jonah Heidelbaum (Logan Lerman) from the late seventies, settled in New York with his safta (Hebrew for grandmother). He is reasoning with his grandmother for dealing weed, all so that he can, “Put food on our tables and roof over our head.” Values are relative and in this case a luxury because, “sometimes when you are trying to survive, you don’t have a choice.”

Now about the poster boy, Al Pacino!At 79, he lives up to the weighty legendary name, while taking on the character of Meyer Offerman, a concentration camp survivor himself and the one who takes Jonah under his wings. But the ones who survive the ‘gasing of ghettos’ are the heroes here, who hunt down the Nazis settled in New York. Where the series falters is, perhaps, it trying to almost cash-in on the human suffering and the horror. Even though it carries the satisfaction usually rendered by revenge dramas, Hunters is not really for the faint-hearted, but if you survive it, it could be this week’s ultimate Holocaust education (with details of the US Government’s Operation PaperClip), every bit worthy of the binge-watch!