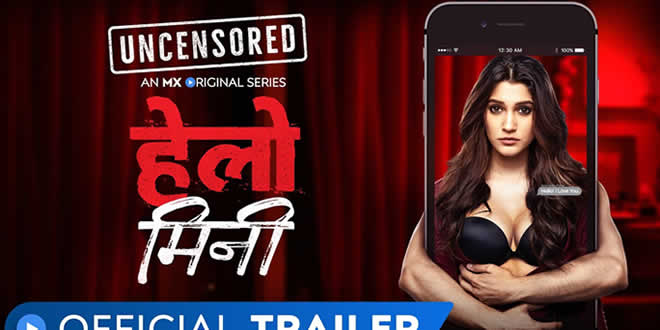 A thriller drama series, revolving around Rivanah Bannerjee, an independent girl, living alone in Mumbai. She has the perfect life: doting parents, a loving boyfriend, and a great job. But …

Hello Mini is an original web series of MX player. In this web series, actors like Anuja Joshi, Priya Benerjee, Arjun Aneja will be seen. This web series will be available on MX Player from 1 October 2019. There are total 15 parts of this web series.

Hello Mini is the story of a 22-year-old Rivanah who shifts from Kolkata to Mumbai. But in the show, it is gradually revealed that she is being followed by someone in the new city, who neither has any name nor any identity. Rivanah finds herself trapped in this situation but realizes that those who are following her are actually helping her, but everything comes at a cost, because the stranger’s obsession with her and eventually her. Together, her life takes on a dangerous path, affecting her life and the lives of all those around him.

Episode 1
Rivanah Banerjee moves to Bombay to start her career as an engineer. A new life in a new city comes with its own challenges, but she faces an unexpected and deadly one: a stalker, who knows her every move.

Episode 2
Rivanah tries to convince her cousin about the danger she possibly faces, but she has no proof and danger may be lurking around the corner. Meanwhile, she tries to adjust to life in Bombay, also fending off unwanted advances from a colleague. But a surprise visitor lifts up her spirits.

Episode 3
Megha and Adil’s constant fighting force Rivanah to move out on her own. She meets her new roommates, the oddball Asha and the party-animal Ishita. Unfortunately for her, the stalker, whom she has now nicknamed the Stranger, seems to have followed her too.

Episode 4
Rivanah decides to go partying with Ishita, despite her boyfriend’s objections. A drunken video call later, she finds herself on the verge of being dumped. This leads to a falling out between her and Ishita.

Episode 5
Everything’s fine again, but the Stranger has a few more tricks up his sleeve. He calls Rivanah to meet and what she finds there shatters her world completely, sending her into a downward spiral.

Episode 6
After witnessing a heinous crime, Rivanah is restless. Still in her downward spiral, at an office party she drunkenly makes out with Prateek, who uses this to blackmail her. Desperate, she asks the Stranger for help. He agrees, but for a price.

Episode 7
Rivanah gets back at Prateek, with the Stranger’s help, but now she must uphold her end of the bargain. Ishita’s sugar daddy Grover begins to express interest in Rivanah. Meanwhile, the girls have a hot new neighbor.

Episode 8
Rivanah and the neighbour, a struggling actor named Danny, hit it off. But she gets insecure about Danny’s friendship with another girl. She reaches out to the Stranger for advice. A surprise and unexpected visit shake things up for Rivanah.

Episode 9
Rivanah starts to teach some slum children, and the experience leaves her feeling great about herself. Her birthday is approaching and it seems that the Stranger might have a surprise planned for her.

Episode 10
Rivanah goes home to Kolkata for a wedding. There, she meets Abhiraj, a guy her father wants her to marry. Even though she’s in love with Danny, she finds herself mysteriously drawn to Abhiraj as well.

Episode 11
The horrible attack by the Stranger leaves Rivanah completely shaken. Ishita takes her out to dinner with Grover’s credit card to cheer her up, but this brings Rivanah into Grover’s sights.

Episode 12
The video of the horrible attack by the Stranger leaves Rivanah completely shaken. She comes clean to her friends who try to help her figure out who it is and how to stop them. Rivanah also receives another nasty surprise not long after.

Episode 13
Rivanah has been kidnapped and her captor has fatal intentions with her. It’s a race against time as Danny and Ishita work with Inspector Kamble to figure out where Rivanah is before it’s too late.

Episode 14
Rivanah is safe, for now. The Stranger is still on the loose. Ishita, Danny and the police want to apprehend him but Rivanah is now convinced the Stranger is her friend and doesn’t want him caught

Episode 15
In the season finale, everyone converges on Rivanah’s meeting with the Stranger at the coffee shop. Secrets are exposed, relationships are mended and there’s clarity all around. But has Rivanah truly found her worth?

Starts off really good. Doesn’t come off as too dry ,without enough substance just sugarcoating of over the top display of wealth, sex scenes and usage of explicit language.

Really does a good job. A job of thrilling. Things never feel too stagnant. The plot keeps it very interesting . The story is very gripping that will keep intriguing you till the end. Like I said, does a very good job of thrilling the viewer.

Its there. Very sexual. The scenes are very well placed. Never does it makes you fell it’s over compensating for it’s plot.

So in this case (a rare one it is). This web series makes the sexy stuff not only look sexy but essential and magnetic.

Overall Hello Mini for me was a roller coaster ride. It delivered way more suspense, drama, romance than I initially expected, in a way that felt fresh and exciting.

Few things that I was unimpressed by –