Kargil Girl is based on the life of Gunjan Saxena, an Indian Air Force Pilot. The film features Janhvi Kapoor, Pankaj Tripathi and Angad Bedi in the lead roles.

The film was announced on 26 December 2018 as Kapoor shared the first look. Principal photography commenced on 20 February 2019 and was wrapped up in October; it was extensively filmed across Lucknow. Netflix acquired the distribution rights for 70 crores and will stream the film worldwide.

The first poster of Janhvi Kapoor was unveiled on 29 August 2019.

The film was scheduled to release theatrically on 13 March 2020. However, that release postponed to 24 April 2020 due to the COVID-19 pandemic. It was then pulled from the schedule. Netflix later acquired distribution rights to the film and on 9 June 2020 Netflix released a teaser video introducing Gujan Saxena and announcing that the film will be streamed on Netflix.

Janhvi Kapoor plays the ultimate outsider in Gunjan Saxena: The Kargil Girl, a biopic of the Indian Air Force’s first female combat pilot, out on Netflix on Wednesday. It isn’t as slickly made as Uri: The Surgical Strike, but refreshingly, neither are its politics as problematic.

Gunjan Saxena doesn’t subscribe to the hyper-nationalism that recent Indian war films have so proudly worn on their chest. Instead, director Sharan Sharma has chosen to explore a wholly different, but equally thorny topic: feminism.

In our country, the idea of equal opportunity is seen as a threat by those in positions of power. Which is why there is a systemic effort to maintain the status quo. Gunjan Saxena, solely on the strength of her convictions, chose to break it. “Pinjra tod,” her father, played by the great Pankaj Tripathi, tells her in an excellent scene in the film’s final act, when Gunjan, having nearly given up on her dreams of becoming a pilot, returns home. Tripathi, playing perhaps the most tender character of his career — Gunjan’s dad reminded me of Kumud Mishra’s equally virtuous character in Thappad — is the heart and soul of the film.

From an early age, Gunjan’s father, an army officer, was the only one who supported her dream of becoming a pilot. Despite topping her class in school, she frets about telling her parents that her future lies not in some man’s kitchen, but in the skies. The moment when she breaks the news to her folks could almost be mistaken for her coming out as gay — there is gossip among the relatives, her brother adopts the ‘log kya kahenge’ attitude, and Gunjan’s mother even proposes visiting an astrologer for advice on how to ‘cure’ her.

These early scenes unfold at a clip, providing just enough context for us to care about Gunjan and her difficult journey. But every time she overcomes an obstacle — Gunjan in the film is gifted to a fault — she is faced with a new one.

Her joy at being admitted into the air force academy is short-lived, because it is here that she truly experiences sexism. She misses training because the base doesn’t have a place for her to change into overalls. She is forced to relieve herself in a men’s washroom because there isn’t one for women. Nearly all of her fellow cadets refuse to participate in sorties with her, for fear of being outclassed. And her superior (an irredeemable man played by Vineet Kumar Singh) subjects her to further indignity by ordering her to arm-wrestle another cadet, displaying the sort of narrow-minded male mentality that the film repeatedly calls out. She loses, of course, but has the spirit to confront him in a later scene. “Main yahan helicopter udaane aayi hoon ya helicopter uthaane?” she says.

But Janhvi, most certainly, is expected to do the heavy lifting. Like Gunjan, it seems as if the young actor is aware that she must work harder than others to prove herself. She brings a sense of discomfort to her performance in the air force scenes, which I’d like to believe is deliberate. In any case, it works. It’s not easy playing a person who’s massively proficient at her job, and still so doubtful of her own potential.

Gunjan in the film is what many might describe as a Mary Sue — a slightly outdated term used to describe a character who is implausibly skilled, even within the realms of fiction. There is no obstacle Gunjan can’t cross by simply tapping into her reserve of strength. And there is no narrative problem that Sharma, who is making his directorial debut here, can’t solve with a montage, or with the help of an overbearing background score.

He structures the film almost like a superhero origin story. Gunjan suffers hardships despite her obvious talents, but she develops her skills patiently, until she is called upon to unleash her powers in battle. By writing Gunjan as someone whose first love isn’t serving their country, but flying, Sharma offers a new perspective on uber-patriotic war movies. This is a welcome change of pace, especially in India, where the benchmark for war films is determined by JP Dutta’s filmography .

Many might not agree with this, and that is understandable; some might even be annoyed, which is also understandable. But two of the best (and most progressive) Netflix India films this year have been produced by Dharma. 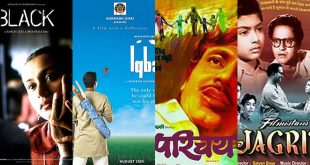