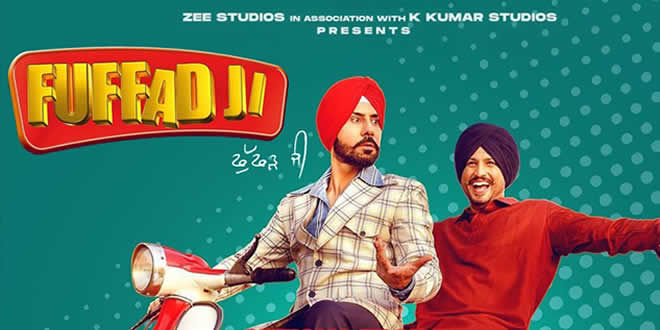 Fuffad Ji is a 2021 Indian Punjabi-language comedy film directed by Pankaj Batra. Staring Binnu Dhillon, Gurnam Bhullar, Jassie Gill, Jasmin Bajwa as a lead role. The movie is written by Raju Verma and the music is given by Daoud Music. The movie is produced by Zee Studios and K Kumar Studios. Movie is scheduled to be released on 11 November 2021.

The shooting of her Punjabi Film is currently on and she has been paired opposite Jassie Gill in it. A still from the shoot has gone viral in which Sidhika is seen in wedding attire. She is wearing a bright red salwar suit with a dupatta on her head. To add to the jewelry there is a mang tikka and bangles with chuda latkhan, mostly worn by Punjabi brides. Jassie Gill is spotted wearing a semi-formal shirt and trousers. Sidhika and Jassie are hugging each other and there’s no doubt they look good together on screen.

Upcoming Punjabi film Fuffad Ji has been successful in building curiosity with its teasers and key art. And now, with its trailer release today, the movie has generated a lot of excitement among the viewers. Starring Binnu Dhillon as the brother-in-law of Gurnam Bhullar, the trailer shows the difference of opinion between the two and how their rift creates tension in the families. With Jasmine Bajwa and Sidhika Sharma in the female lead roles, the film is a comedy entertainer with the right dose of drama.

Swirling his keys and twirling his moustache, the son-in-law of the house, Arjun Singh (Dhillon), walks in and the entire household runs around to make him feel special while he tries to find a problem where there is seemingly none.

With a fragile ego, Arjun Singh takes full advantage of his exalted position as the uncle and spins tall tales, expecting everyone’s rapt attention and service. But underneath all that, he genuinely cares about his nieces and treats them like his own daughters.

One day at the village fair, Chand Singh (Bhullar) rubs Arjun Singh the wrong way. In an unexpected turn of events, Palli (Bajwa) gets married to Chand Singh, making him the fellow son-in-law with Arjun Singh. The second half of the film then focuses on the tussle for power between the two sons-in-law.

Light-hearted in tone, Fuffad Ji creates the rustic ambience of a village where the traditional family plays out an exaggerated version of the obsequious hospitality, underlining the exalted position that a son-in-law enjoys in the wife’s maternal home. The second half becomes a tad slow but overall the film is enjoyable, weaving in an anti-dowry message and the social message that sons-in-law should behave like sons of the family and not expect servility from their in-laws.

Dhillon is fabulous as the uptight uncle and shows versatility in his performance. Bhullar looks handsome as a turbaned Sikh and brings an innocent charm to his character, being the perfect foil to Dhillon’s starched personality. Jasmin Bajwa brings freshness to her able performance. Veterans Hobby Dhaliwal, Malkeet Rauni and others create the perfect atmosphere for the family drama to unfold.

The title song, lively dance numbers ‘Boliyaan Na Paaun’ and ‘Gal Ban Jau’, and the romantic number ‘Aapan Dowein’ stand out for their enjoyable music. This is a family entertainer with a fresh storyline and notable performances.

Previous Five Little Pumpkin Sitting On A Gate: Halloween Poem
Next Halloween Around The World Information