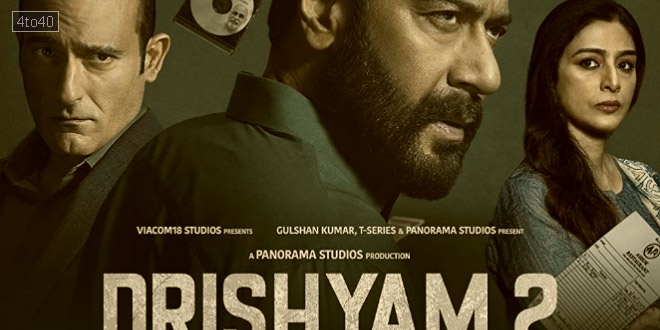 Drishyam 2 is a 2022 Indian Hindi-language crime thriller film directed by Abhishek Pathak. The film stars Ajay Devgn, Tabu, Shriya Saran and Akshaye Khanna in lead roles with Ishita Dutta, Mrunal Jadhav and Rajat Kapoor in supporting roles. It is a remake of the 2021 Malayalam film of the same name and also the sequel to Drishyam (2015).

Primarily filmed in Goa with other locations including Mumbai and Hyderabad, it was theatrically released on 18 November 2022.

The sequel to Drishyam was announced after the success of Drishyam 2 (2021), the sequel to the original 2013 Malayalam film Drishyam (2013), which released in February 2021. It was decided that Abhishek Pathak will direct the film. The film is produced by Panorama Studios, and distributed by Yash Raj Films.

Principal photography of the remake sequel commenced on 17 February 2022 in Mumbai, and was extensively shot in Goa with Ajay Devgn and Shriya Saran. Tabu joined the sets on 26 April and later on Akshaye Khanna joined the sets on 30 April. The film was wrapped up on 21 June 2022 in Hyderabad.

The music of the film is composed by Devi Sri Prasad. Lyrics are written by Amitabh Bhattacharya. The first single titled “Saath Hum Rahein” was released on 1 November 2022. The music rights of the film were acquired by Panorama Music.

He escaped unscathed the first time over. Will Vijay Salgaonkar (Ajay Devgn) be able to fool the police this time too, considering the odds are heavily stacked against him. A fourth class pass yet exceptionally astute man, he is once again pitted opposite the trained police force which now has a new sharp IG in place… and the game begins anew.

What you see is what you may or may not get. But here Ajay Devgn’s solid voice reminds you of how more than words you need to pay attention to drishya for lies can find space beneath words. So pay attention to the visuals. Drishyam 2 takes off from where the prequel left… Only seven years have passed since the unfortunate turn of events that rocked two families. But the case against Vijay, who has found material success, still festers and pesters. His family too has not fully recovered from the trauma of accidentally killing a young man. Wife Nandini (Shriya Saran) is a bundle of nerves and weak link in Vijay’s game plan. Meera Deshmukh (Tabu), distraught mother of the murdered boy does not believe in forget and forgive. She wants to pursue the case once more as she returns to Goa. Will she find closure this time…?

Suffice it is to say early on in the film Vijay says, ‘audience does not like it if the hero goes to jail in the end.’ So, the cue is obvious and we may not be as clever as Vijay, we know where the anti-climax is headed. But the thrill here lies in how can he once again walk scot-free, especially as in the very first scene we meet an eye witness.

Drishyam 2 like its prequel is no whodunit. Rather its strength lies in the mental games, the intelligent one-upmanship our hero has mastered to save his and his family’s skin. Clearly, this is no edge of the seat thriller. But, it gives you enough heart in your mouth moments and the second half sure packs many a riveting surprise. Of course, if you have seen the original Mohanlal starrer Malayalam film, you already know which way the cookie will crumble. The problem with remakes is that these do not bring anything original to the table. Yet to give the makers their due, Drishyam 2 holds on its own and even if you have seen the original, the interest does not waver.

Much of the credit for keeping you on tenterhooks also goes to its actors. Ajay Devgun is as self-assured as his character demands. He plays the caring family man who will go to any length to save his family with conviction and consummate ease. Tabu as the grieving mother and Rajat Kapoor as the equally desolate father but one who feels they have to move on in life are on point. Akshaye Khanna brings the necessary chutzpah as he slips into the part of IG. Saurabh Shukla as Murad Ali the writer who holds the key to the pieces of the puzzle adds to the film’s narrative which is both gripping and neatly packaged. Set in Goa, the idyllic background gels with the storyline and its thematic undercurrent.

In case you missed the original and have no aversion for remakes Drishyam 2 makes for engaging set of drishya. Or let’s say revisualization, the power of which surprisingly works. In short, Drishyam 2 is a fine sequel and a decent enough remake.