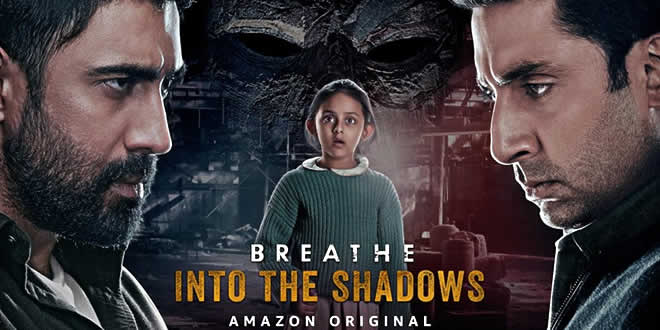 Breathe: Into the Shadows is an Indian crime drama thriller web television series created and directed by Mayank Sharma and produced by Abundantia Entertainment for Prime Video. The series stars Abhishek Bachchan, Amit Sadh, and Nithya Menen in lead roles. All 12 episodes of the series premiered on July 10, 2020.

The story revolves around a 6-year old girl who is kidnapped by a mysterious masked man, who demands an unusual ransom. To save his daughter, Dr. Avinash Sabharwal (Abhishek Bachchan) must kill someone! Meanwhile, Kabir Swant’s (Amit Sadh) journey continues in the hostile environment of the Delhi Crime branch. Lies, deceit and mind games begin when Kabir is given charge of the investigation and meets Avinash. How far will Avinash go to save his daughter?.

The series was officially announced in late 2018, attaching Abhishek Bachchan and Saiyami Kher to star and Amit Sadh from the original series returning as Kabir Sawant. Nithya Menen joined the cast in December 2018.

In June 2020, Prime Video announced that the series was scheduled to premiere on July 10,2020.

Little children are an endangered species in television dramas. They’re vulnerable to all sorts of threats — freak accidents, abusive parents, deranged kidnappers. But a narrative trope that has been handled with great compassion in the past, in shows such as The Missing and The Killing (not to mention films such as Te3n and Ugly), is treated with the emotional complexity of an empty hard drive in Amazon Prime’s Breathe: Into the Shadows.

Simply slapping a sinister-sounding suffix to the title, and stunt casting Abhishek Bachchan does not erase memories of season one, which was, to be clear, the most bizarre show of 2018. Season two is just as ridiculous.

Bachchan (now credited as Abhishek A Bachchan) plays Avinash Sabharwal, a psychiatrist with a thriving practice in Gurugram. Such is his influence, we are told, that he is frequently summoned to appear in trials, providing ‘expert testimony’ that even an intern could successfully counter. But he delivers it with a stern expression and in a vaguely foreign accent. So he must be taken seriously.

Avinash and his chef wife, Abha, are parents to a young girl named Siya, who is a ‘juvenile diabetic’ in need of regular insulin shots. Their quiet life of domesticity in New Delhi is disrupted when, at a friend’s birthday party, Siya goes missing. Cops are called, and they do the customary ‘chhanbeen’ of the crime scene, waving flashlights under tables and opening their eyes really wide. But alas, Siya isn’t in some bathroom stall, giggling to herself; she has, in fact, been taken.

And Avinash is no Liam Neeson. Like season one, Breathe: Into the Shadows is hardly about the tragedy of a parent’s loss. It is the origin story of a serial killer.

Months go by before Avinash and Abha are contacted by the kidnapper, via a hilariously cartoonish letter and a free iPad. And on that free iPad, the kidnapper has uploaded an expertly cut montage of Siya, in a cell of sorts, being looked after by a young woman. Siya, as it turns out, is alive and well. In fact, her eating habits have improved in captivity.

And it is precisely at this moment that Breathe: Into the Shadows descends into full-blown madness. The kidnapper, perhaps having recently watched David Fincher’s Se7en, tells Avinash that in order to rescue Siya, he must kill random people who, according to the kidnapper, are guilty of exhibiting ‘sins’ such as lust and anger. “Krodh ki aag jo apne andar paale wohi aag usse bhasm kar daale,” says the kidnapper, not so much channeling Andrew Kevin Walker as fully turning into Milap Milan Zaveri.

It’s important to note that while R Madhavan’s Danny from the first season turned into a psychopathic killer of his own volition, Avinash at least contemplates the morality of murder for a moment or two. That doesn’t however, stop him from playing mind games with his first victim, before ultimately just killing him violently. At least in the four episodes provided for preview, the motivations of the kidnapper (who wears a clay mask, by the way, even when he is alone) are frustratingly muddled.

By leaning far too heavily on the crime thriller aspects of the show, writer-director Mayank Sharma completely dilutes the family drama. By turning Avinash into a remorseless killer, he robs the story of any redeemable characters.

It doesn’t help that the entire thing is ineptly put together. By slapping logic across the face every time it rears its head, Sharma is forced to rely on contrivances and amateurish exposition to propel the plot. The passage of time is announced, instead of implied. “Chaar mahine beet gaye,” Avinash says at one point, for nobody but the audience. When Siya wonders if her parents have forgotten her, the line is repeated 11 times. I counted.

Amazon could’ve taken the anthology route with Breathe, stitching the two seasons together thematically instead of grasping at straws trying to find a narrative connection. There isn’t one. Normally, Amit Sadh’s Inspector Kabir Sawant would’ve been the protagonist of this show. He’s the only non-psychopath on the roster. Instead, despite Sadh’s performance (which is far superior to anyone else’s, by the way), he is relegated to a supporting presence, while the more popular Bollywood actor is given top-billing.