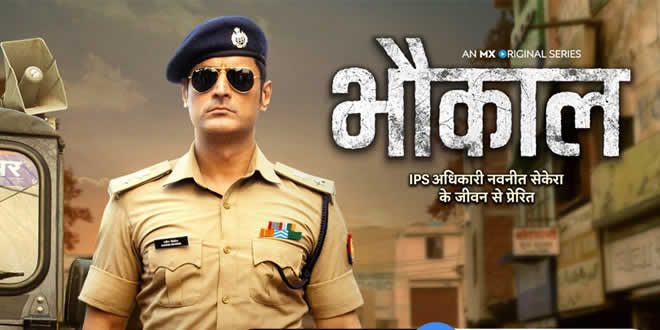 Naveen Sikhera makes his way into the sin city as the new SSP, he is hit by the prevailing chaos and lawlessness in the city. Muzaffarnagar is ruled by Shaukeen gang in the east and the Dedha brothers rule the west.

Muzaffarnagar is the crime capital of India. As Naveen Sikhera makes his way into the sin city as the new SSP, he is hit by the prevailing chaos and lawlessness in the city. Muzaffarnagar is ruled by Shaukeen gang in the east and the Dedha brothers rule the west. The terror of these gangs is so much that even the local police never dares to question them. Taking the reins in his hands, Sikhera starts cleansing the city and undertakes numerous encounters leading to the destruction of the Shaukeen gang and making in-roads into the operations of the Dedha gang.

Discipline, determination and a selfless need to serve the masses – IPS officers are those superheroes in the khaki uniform who instill in us a sense of peace and security. Their courage is our shield but not many hear about their brave deeds. Bringing viewers the untold story of one such brave heart, who drastically brought down the organized crime rates in UP in the early 2000’s is the gritty and hard hitting MX Original Series Bhaukaal, inspired by the life of IPS Officer Navniet Sekera.

If you haven’t watched the show yet, you must watch it now! We’ll tell you why:

MX Player’s ‘Bhaukaal’ is directed by Jatin Wagle. Produced for Applause Entertainment by Baweja Movies, it is a 10-episodic series that highlights the journey of a courageous police officer.

Binge watch all episodes on MX Player for FREE – http://bit.ly/BhaukaalEp1

The dark, gory universe of Muzaffarnagar is ruled by Shaukeen and the Dedha Brothers. Loha Singh, a member of the Dedha clan is killed by Abbas, who is a close ally of Shaukeen. Around the same time, Naveen Sikhera is transferred as the new SSP to Muzaffarnagar, the crime capital of India. Shaukeen informs the Dedha brothers about Abbas’ whereabouts, so that a gang-war can be avoided. As Naveen Sikhera reaches Muzaffarnagar, he is welcomed with the murder of Abbas and other innocent civilians by the Dedha brothers.

An innocent man named Vinay Tyagi gets kidnapped by Shaukeen’s gang. Naveen Sikhera joins duty as the SSP. Vinay Tyagi’s father implores Sikhera to take action against the Shaukeen gang, who have demanded a huge ransom. Sikhera decides to visit the ghetto from where Shaukeen commands his power. As the battle lines are drawn between them after the first confrontation, Shaukeen is a bit shaken. To instil his fear on the SSP, he gets Vinay Tyagi beheaded and delivers the head at Sikhera’s doorstep.

After the death of Vinay Tyagi, the people of Muzaffarnagar have completely lost faith in the police. Naveen calls his team from Meerut to assist in his battle against the criminals. The team chalks out a plan and Salim is chosen to infiltrate Shaukeen’s gang. Bhati, Balram and Maruti are asked to keep an eye on the Dedhas. Bunty Jhaal, the brother-in-law of Chintoo and Pintoo Dedha, comes under their scanner, galvanising the cops into action.

Bunty Jhaal is cornered by Sikhera’s team but he escapes into a sugarcane field. As a series of police reforms, Naveen Sikhera decides to revoke the cases of ‘history-sheeters’. Not only that, in the defunct police station of Muzaffarnagar, a mobile phone tracing centre is set up under inspector Vinod. Soon, the centre taps Farooq’s call with Rashid Khan and in a massive encounter, Rashid and his henchmen are killed by Sikhera’s team. This worries Shaukeen as the clouds of danger start gathering on their fortress.

The police have upped the ante against the bastions of crime. Cracks have appeared in Hussainpur, as the rift between Farooq and Naazneen, Shaukeen’s mistress have started increasing. Aslam Rana, the politician backing Shaukeen seems anxious by the police actions. He pressurizes Shaukeen to take action against Sikhera. Shaukeen, decides to entrap the SSP by involving Bunty Jhaal. Whether it is Bunty Jhaal or Sikhera, who is killed, Shaukeen is the one who will gain.

The Police team proceeds to catch Bunty, ending up in a massive encounter, leading to the criminal’s death. Without hampering their efforts, the SSP’s team traps Gurjan, Dedha’s man. They also get to know that Pintoo Dedha is coming back to Muzaffarnagar hence, they decide to capture him.

Pintoo Dedha successfully escapes. Sikhera realises there is a traitor in their department. Salim successfully makes his way into Shaukeen’s house. Farooq feels that the terror and influence of Shaukeen gang is waning. In the absence of Shaukeen who is in Nepal, he decides to kidnap Vikram Tyagi and extort money from his father. As they head to Salarpur, Salim manages to inform his team. Dedha brothers meet their police source, who advises them to remain calm as the SSP’s attention is presently focussed on the Shaukeen gang.

Farooq shakes the Tyagi house, by kidnapping Vikram Tyagi. He realises that there is a mole amongst them reporting to the police. While Vikram Tyagi’s father is called by Farooq with the ransom, Sikhera and his team follow the old man. Farooq is taken under custody while Vikram Tyagi is brutally murdered. On the other hand, Sikhera gets instructions from the IG to halt all operations.

When Naveen Sikhera is questioned by the authority, he is all for his men. The IG commands Naveen to escort the deputy CM. Shaukeen is back from Nepal and he decides to free Farooq from the premises of the court. Since, Naveen Sikhera has been diverted to the rally of Deputy CM, he entrusts Rajesh, his driver with the responsibility of taking Farooq to the court. A massive encounter takes place in the court between police and the goons, Farooq tries to escape but Rajesh kills him; sacrificing his own life in the process. What ensues is a massive operation which Shaukeen plans to execute against the police.

Salim mixes a drug in Shaukeen’s soup and abducts him to a distant field. When Sikhera reaches the location, he finds Salim hanging on a tree. A massive, deadly encounter is what proceeds silencing Shaukeen for eternity.