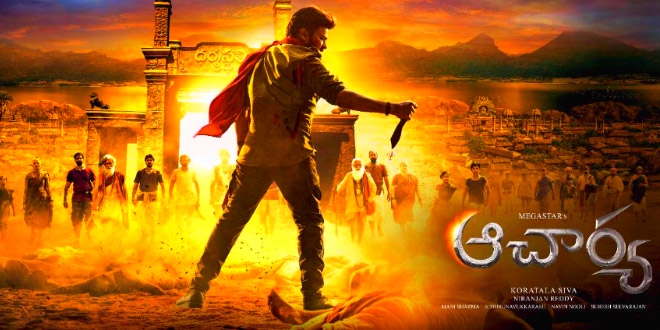 Touted to be a socio-political actioner, the plot revolves around a middle-aged Naxalite-turned-social reformer who launches a fight against the Endowments Department over misappropriation of temple funds and donations.

The film was launched in October 2019. Principal photography began in January 2020 but the production has been delayed owing to the COVID-19 pandemic. The film is scheduled for a worldwide release on 29 April 2022.

The film was launched on 8 October 2019 with the working title of #Chiru152 on Vijayadashami festival, being the first collaboration of Koratala Siva and Chiranjeevi. On 1 March 2020, the title was revealed to be Acharya.

Mani Sharma is the music composer. Cinematography and editing is performed respectively by Tirru and Naveen Nooli. Suresh Selvarajan is the art director.

In January 2022, Asianet News reported that the film’s storyline is based on the Naxalite movement in Srikakulam district, led by poet and cultural activist Subbarao Panigrahi.

Trisha was cast as the lead but she exited later, citing creative differences, and eventually replaced by Kajal Aggarwal. Reportedly, Mahesh Babu was offered the cameo lead Siddha’s role. However, Chiranjeevi later confirmed his son Ram Charan for Siddha’s role; Koratala Siva adjusted the role to make it full-fledged. In an interview with Variety, Charan said “It’s a 40-minute role, it’s pretty much the whole of the second half.”

Pooja Hegde was cast as Neelambari opposite Charan. Regina Cassandra was signed for a special song in March 2020.

Principal photography began in January 2020. Important portions were shot with Chiranjeevi and others at Ramoji Film City. The filming was going at a brisk pace until suspension in March 2020 due to COVID-19 pandemic. Filming was resumed in November 2020, and Aggarwal joined the sets in December 2020 in Hyderabad. A temple town set spanning 20 acres was built for the film.

Charan joined the production in January 2021. The film team reached Rajahmundry the same month. In March 2021, Pooja Hegde shot her portions with a montage song at a specially-constructed set in Maredumilli. A schedule took place at Singareni coal mines, Yellandu later that month. Owing to the second wave of COVID-19 pandemic, the filming was paused again and later resumed in July 2021 at a village set in Hyderabad. Both Ram Charan and Chiranjeevi resumed shooting their portions that month. Except for two songs, the rest of shoot finished in August 2021.

The film’s soundtrack album is composed by Mani Sharma.