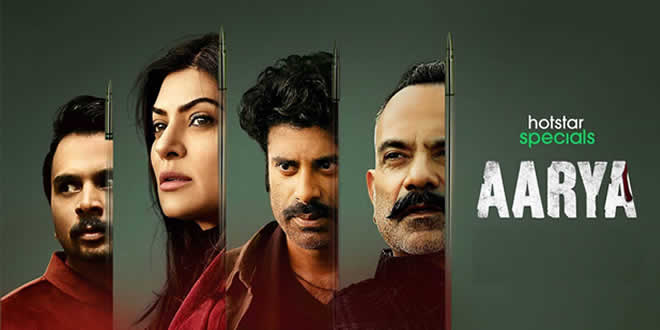 Aarya is an Indian crime drama web television series co-created by Ram Madhvani and Sandeep Modi based on the Dutch drama series Penoza by Pieter Bart Korthuis for Hotstar’s label Hotstar Specials starring Sushmita Sen in the titular role. The show is produced by Endemol Shine India and Madhavani’s Ram Madhavani Films. The series is co-directed by Ram Madhvani, Sandeep Modi and Vinod Rawat which was released on 19 June 2020.

Karam mein hi teri shaan hai, karam teri pehchaan hai… jeevan sangarsh se bachna hi kya. Such deep philosophical thoughts in what is essentially a crime drama. Or, is it? Aarya, touted as Sushmita Sen and Chandrachur Singh’s comeback vehicle, veers in so many directions that it’s hard to peg it down.

Now, that in itself shouldn’t be such a bad thing. Multi-layering is what OTT dramas are best known for.

Only problem with Aarya, streaming on Disney+ Hotstar, is while at one moment it tries to take you on an emotional ride, at another it tries to unravel a drug mafia, yet never becomes more than the sum of its parts. A family drama with an overdose of Hindi film songs, it does begin well, on an intriguing note too. Three partners of a shell company, a cover for drug dealings, duel over a bounty that one of them has stolen from rival drug-lord Shekhawat (Manish Choudhary). Soon, you are drawn into the lives of family and friends Tej (Chandrachur Singh) Sangram (Ankur Bhatia) and Jawahar (Namit Das). Tej’s family with wife Aarya and three lovely kids is picture perfect. Yet, there is more than what meets the eye.

The narrative does flip-flop more than once and at moments takes you by surprise too. Yet, much of it like the password to the pen-drive that holds the key to drug dealings and what the narcotics department is after is so damn predictable. Since the title of the series is Aarya, the tragedy in the offing is almost writ on the wall.

Former Miss Universe Sushmita Sen, essaying the titular part, has clearly aged well and is relatable as the homemaker hurled into thick of things. She grieves, smiles and tries to be heroic in the face of adversity. Just when you think she is ready to take on the mantle of queen of narcotics in Rajasthan, she smiles a little more and turns a new leaf. And the script creates gaps that even her statuesque frame can’t fill.

The Maachis actor Chandrachur Singh has clearly not aged as well as the beauty queen. But he is earnest even in a brief performance we so wish was much bigger than it is. Besides, the husband-wife duo, there are some key characters such as ACP Khan(Ravi Kumar) and several lurking on the side lanes, who leave a mark. Child actors (Virti Vaghani as Aru, Viren Vazirani as Veer Pratyaksh Panwar as Adi) are the cutest. Sidekicks have flesh and blood. Sikander Kher, the man Friday of the family, especially the loyalist of patriarch Zorawar (Jayant Kriplani), carries with him the mystique of the persona so needed for his part. But by the time the series climaxes, you not only feel cheated but also that Kher too has been devoid of what could have been a more substantial part.

Could have been, actually is a refrain that comes so often to your mind, especially since Ram Madhvani, the creator of the series, is the director who gave us thrilling and engaging Neerja. Not to say that Aarya does not engage at all. But much especially the gay angle, the mistress bit, the foreigner son-in-law Bob and the Bhagavad Gita teachings seem superimposed and do not flow organically. Sure, each episode of the nine part series ends on a hook tempting enough to swallow the bait. But the overall impact is far from tantalising.

The final twist in the tale is surprising but certainly not fulfilling. The sting in the denouement might leave room open for a sequel…but not one that you would be looking forward to. While we can’t comment on where the series is faring in comparison with the Dutch drama series Penoza on which it is based. But if it is taking some inspiration from Queen of South, it stands nowhere close to it in terms of pace, action and even writing. Comparisons we all know are unfair, and it must be seen as standalone series. And as a series standing on its own merit, if slow burn with a topping of emotions works for you, Aarya makes the watchable grade.