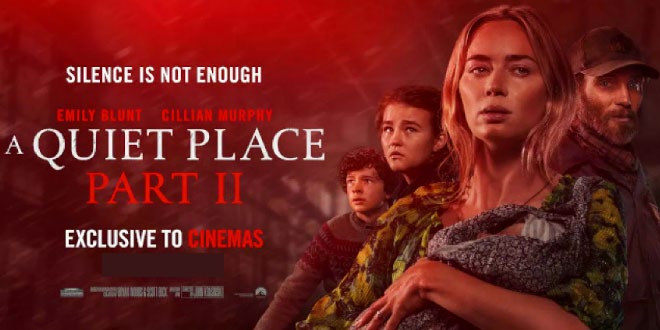 Following the events at home, the Abbott family now face the terrors of the outside world. Forced to venture into the unknown, they realize the creatures that hunt by sound are not the only threats lurking beyond the sand path.

A Quiet Place Part II is a 2021 American horror film and the sequel to 2018’s A Quiet Place, following the family from the first film as they continue to navigate and survive in a post-apocalyptic world inhabited by blind aliens with an acute sense of hearing. The film was written, produced, and directed by John Krasinski for Paramount Pictures. Emily Blunt, Millicent Simmonds, and Noah Jupe reprise their roles from the first film, while Cillian Murphy and Djimon Hounsou join the cast; Krasinski returns from the first film in a new flashback sequence.

Paramount Pictures began development of a sequel in April 2018, following the box-office and critical success of the first film. By the following August, Krasinski was working on the screenplay, and in February 2019, he was confirmed as returning to direct. Production took place in Western New York from June to September 2019. Krasinski was credited with writing the sequel, based on characters created by Bryan Woods and Scott Beck. The sequel was produced on a budget of $55–61 million, over three times the original’s $17 million.

The film had its world premiere in New York City on March 8, 2020, and after over a year of postponements due to the COVID-19 pandemic, it was theatrically released in the United States on May 28, 2021. It became available to stream on Paramount+ 45 days after its theatrical debut. The film set several box office records, including the biggest opening weekend of the COVID-19 pandemic, and grossed $296 million worldwide, making it the eighth highest-grossing film of 2021. It received positive reviews from critics, who praised Krasinski’s direction, the expansion of the setting, atmosphere, editing, and the performances, particularly those of Simmonds and Murphy.

“Bigger and better” – the standard mantra of the Hollywood sequel – can be a sticky proposition for any horror franchise. This is a genre, after all, where terror lies in the intimate and the unseen, in the unfathomable beast lying in wait around the corner. But for John Krasinski, whose debut film A Quiet Place yielded over $340m worldwide, it was inevitable that studio executives would be clamouring for more.

Krasinski has taken what could only be described as the “James Cameron’s Aliens” route of delivering a sequel. A Quiet Place was a jagged ball of nerves, built on the ingenious idea that Earth has been invaded by predatory aliens with hyper-sensitive hearing – if you make a sound, you die. A Quiet Place Part II is brasher, more action-driven, and louder. It’s still thrilling to watch, even if the ideas ultimately dilute the terror of what came before.

Krasinski’s script certainly delivers on its predecessor’s final shot, which saw recently widowed matriarch Evelyn Abbott (Emily Blunt) pump her shotgun, primed to take on the extraterrestrial hordes. There are shades of Ellen Ripley here, in her shrewdness and sense of defiance, and she even gets her own “Get away from her, you b***h!” moment.

Evelyn, with the remains of her family, steps out into the wilderness in search of allies. And she soon finds one, in the form of Emmett (Cillian Murphy), an old friend. All the years and the loss have been unkind to him – his thick, grey-dappled beard and darting eyes now give him the appearance of an anthropomorphic raccoon. Murphy, the star of 28 Days Later, brings a certain horror pedigree to A Quiet Place Part II. He’s also skilled in finding heart and humanity in even the most improbable situations. Emmett tells the Abbotts that, whatever connection they may once have shared, it existed only in a past life. The world is cruel now, and has no room for neighbourly affections.

But Krasinski hasn’t lost sight of how much of the first film’s success relied on the talents of its younger stars, Millicent Simmonds (Regan) and Noah Jupe (Marcus), as Evelyn’s children. What these two actors share is a vast capacity for compassion, with a hopeful urgency to their spirit. Simmonds, particularly, has the quality of a future star marking out her territory. And while horror has a long history of introducing visually or hearing-impaired characters only to exploit them for cheap scares, Krasinski manages to avoid this accusation. Not only does he cast Simmonds, a deaf actor, in the role, but he’s continued to write Regan as a layered, complex character – brave to the point of recklessness, but resilient, too.

The adults may have pulled the emotional shutters down, but it’s the kids, especially Regan, who fly against this ingrained isolationism. Krasinski was uncynical and open enough to put love, particularly the bonds of family, at the centre of A Quiet Place – the director played Evelyn’s husband, who sacrificed himself to save his wife and children, while Blunt and Krasinski are married in real life. The same is true here, even if its powers feel less focused than before. The Abbotts stumble across communities that are both hostile and welcoming (Djimon Hounsou is criminally underutilised here).

What we learn about the creatures both lessens their mystique and softens their threat, though it never reaches the ludicrous extreme of the colonial marines in Aliens gunning down Xenomorphs like they’re a mere inconvenience. But, while A Quiet Place Part II is an admirable follow-up, it doesn’t leave much scope for any future sequels. It’s not that the well has run dry, but that the monsters have lost their bite.