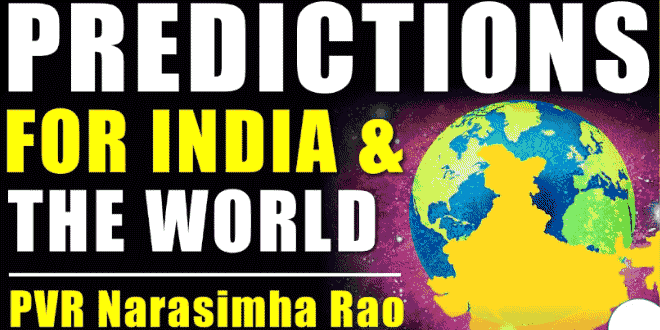 2020 Predictions for India and the World

Infinity Foundation has conducted the interview with the guest only on the domain expertise that he has in the field of Jyotisha. Infinity Foundation is not responsible and may or may not subscribe to any of his views held on any subject.

PVR Narasimha Rao has a bachelors degree from IIT, Madras and a masters degree from Rice University, Houston and lives in greater Boston where he works as a firmware manager at a top semiconductor firm. He received “Sanskrita Bhasha Kovida” and “Sanskrita Bhasha Visharada” diplomas at an age of 11 and combines his Sanskrit knowledge with scientific temper to conduct fresh research into the teachings of rishis.

He is an astrology researcher, author, teacher and also the author of popular Jyotish / Astrology software “Jagannatha Hora” used by many Vedic astrologers and students across the world. Thousands of spiritual seekers are performing daily homa (fire ritual) for the dawn of a new Dharmik era on earth and individual spiritual progress, using free and simplified homa manuals on his website (www.VedicAstrologer.org).

In this episode, Shri. Narasimha Rao weighs in on the most looked forward to predictions for India and the world. He forecasts the future political course of India and the place it will occupy in the world. He also weighs in on the future of the US. He also predicts the future of China. Do watch the video for these interesting predictions. He also predicts some important wars in the coming decade which will also decide the fate of many countries. He also predicts the fall of capitalism just as socialism did. He predicts that the future is one of dharmic economics. He does not give us any magic solution for the COVID crisis and says that this crisis will not end any time soon. He says that this is the response of mother earth to the havoc wreaked on her by unsustainable lifestyle that mankind has adopted over the past century and more. He recommends chanting of mantras to one’s own ishtadevata during these times and says that mantras to ugradevatas are particularly useful at this time. He ends by giving advice to society on how to encourage young people who are interested in jyotisha and how this sastra can be revived.

Brief Profile: Born and brought up in India and currently living in USA with a wife and two children. P. V. R. Narasimha Rao have a bachelors degree from IIT, Madras and a masters degree from Rice University, Houston and live in greater Boston where I work as a firmware manager at a top semiconductor firm. He has received “Sanskrita Bhasha Kovida” and “Sanskrita Bhasha Visharada” diplomas equivalent to BA degree in Sanskrit, at an age of 11. I also received “Rashtrabhasha Praveena” diploma equivalent to BA degree in Hindi, at an age of 12. He combine his Sanskrit knowledge with scientific temper to conduct fresh research into the teachings of rishis.