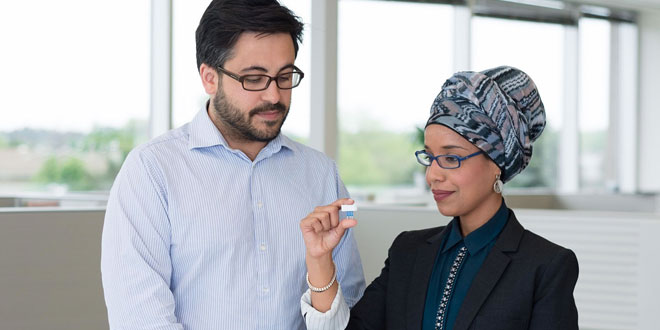 Ottawa, Canada – November 22, 2016 – Spartan Bioscience, which is based in Ottawa, unveiled a portable DNA tester called the Spartan Cube; the cube measures 4 inches in all directions, which makes it the world’s smallest genetic testing device.

Photo: The cube measures 4 inches in all directions, which makes it the world’s smallest genetic testing device. The company says it can yield results in less than half an hour.

The Guinness World Records world record for the largest model of DNA measures 43.5 m (142 ft 8.4 in) long and was created by Ryerson University – Faculty of Science (Canada) in Toronto, Ontario, Canada, on 7 May 2016.

Guinness World Records also recognized the world record for the largest human DNA helix; it involved 4,000 participants, achieved by the Medical University of Varna (Bulgaria), in Varna, Bulgaria, on 23 April 2016.

The machine can test for a range of human diseases, and can also be used to detect infectious bacteria in foods, find harmful microbes in water, or see if your dog has kennel cough.

The company says it can yield results in less than half an hour.

The device’s simple design enables anyone to quickly perform DNA testing. It connects wirelessly to a tablet or laptop that displays test instructions and results with an intuitive touch interface.

In addition, the Cube goes from sample to result in a fraction of the time compared to traditional lab-based testing. Doctors, patients, and other users can get immediate results rather than waiting for a lab to run a test.

Paul Lem, M.D., CEO of Spartan Bioscience, says the Spartan Cube is taking the complexity out of DNA testing.

“The Spartan Cube is a revolutionary molecular diagnostics platform. It enables rapid DNA testing with a device so portable, you can literally hold it in the palm of your hand,” says Dr. Lem.
“Whether you want to quickly test a sick patient in a doctor’s office or run a genetic test for drug response—the Spartan Cube will provide results when and where you need them.”

After releasing the Cube last spring, Spartan launched its first three commercial applications: unregulated tests that allow anyone to determine if they have strep or carry a genetic mutation that increases their risk of developing Alzheimer’s disease, and for building managers to test their heating, ventilation and air-conditioning systems for toxic bacteria.

Users collect a DNA sample by doing a cheek swab, which is inserted into the top of the Cube. Inside, using a Nobel Prize-winning chemical process called polymerase chain reaction, the machine breaks open the cells, releasing the DNA and copying it a billion times.

Special chemicals in kits sold separate from the device, depending on the test, glom on to DNA in specific parts. The machine then uses fluorescence to determine if the targeted condition is present, sending results to a tablet computer.