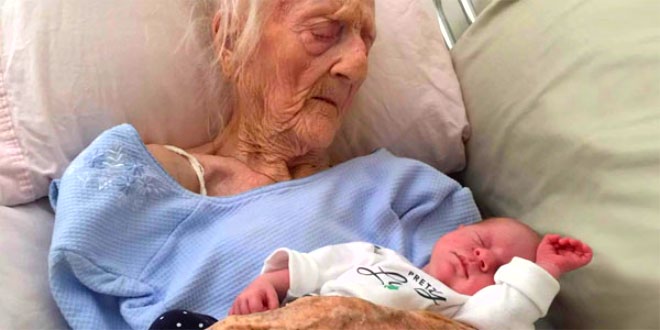 Napoli, Italy – March 23, 2016 – Anatolia Vertadella, a 101-year-old Italian woman, has given birth to a 9-pound baby after a controversial ovary transplant widely criticized by medical professionals because of her advanced age, thus setting the new world record for being the Oldest mother.

Photo: Anatolia Vertadella, a 101-year-old Italian woman, has given birth to a 9-pound baby after a controversial ovary transplant widely criticized by medical professionals because of her advanced age.

Guinness World Records also recognized the world record for the Oldest mother to conceive naturally, set by Dawn Brooke (UK), who became the oldest natural mother when she gave birth to a son by Caesarian section at the age of 59 years. She conceived accidentally, having managed to ovulate past her last period.

The illegal and controversial surgical operation was done in a private clinic in Turkey, where European laws on ovary transplants do not apply, admits the centennial mother who does not wish to disclose the name of the clinic where the operation was undertaken.

“I am very grateful to all the team of doctors who decided to go on with the operation,” she admitted in tears.

“I am so grateful to have given birth to my 17th child. This is a true blessing and a testament to the power of the creator,” she told local reporters.

“For so long I have felt useless to God, I could not procreate since I turned 48 years old when I was diagnosed with ovarian cancer. For a long time I believed God was punishing me for only bearing 16 children, but in his godly generosity, he has granted me with fertility once again,” acknowledges the century-old fervent Catholic.

Although he admits the procedure is highly controversial, Dr. Popolicchi believes the ultimate decision was up to his patient to make.

“The operation was completely legal in Turkey and undertaken by a handful of expert surgeons. The lady is in great health for her age and I predict she has still a many good years in front of her to share with her child. So many children are born in this world unwanted or by accident. Is it not a beautiful thing to know this child comes to life in a loving home?” he asked reporters.

The world’s oldest mother was previously believed to be Malegwale Ramokgopa, a woman born in South Africa in 1839 who allegedly gave birth to twins three days after celebrating her 92nd anniversary on October 3, 1931, which made nation-wide headlines at the time.