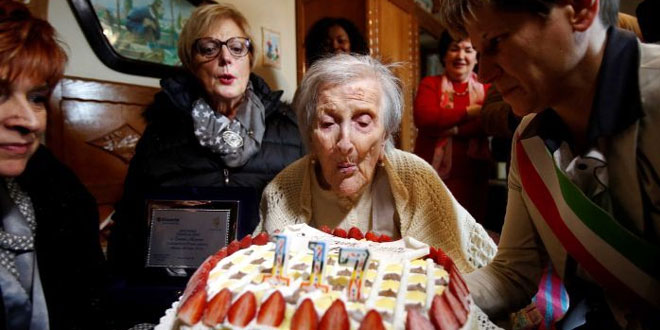 Verbania, Italy – November 30, 2016 – Italy’s Emma Morano, the world’s oldest living person, marked her 117th birthday Tuesday, blowing out all the candles on her cake; she received a greeting from Italy’s president, read by an official, wishing her “serenity and good healthy,” and appeared for a brief live broadcast on state-run television.

Guinness World Records also recognized the world record for the oldest person to be baptised; it is Clarence Raymond Kannheiser (USA), who was christened on 11 April 2009 aged 97 years 53 days at St. Patrick Church, Rochelle, Illinois, USA.

Beaming at the attention, Morano took in the festivities for her milestone celebration sitting in an armchair in her one-room apartment in the northern town of Verbania, joined by her two elderly nieces, a pair of caregivers and her long-time physician.

She happily accepted some gifts, including her favorite cookies, which she ate with some milk. Then she blew out the candles on her cake — not one for every year, but three numerals to show her age, 117 — and quipped: “I hope I don’t have to cut it!”

To the assembled well-wishers, Morano said, “I am happy to turn 117,” and drew encouragement from her physician, Dr. Carlo Bava.

Another party, including a visit from the mayor and another cake, was planned for the afternoon, after a nap.

Ms Morano, born on November 29, 1899, was raised in the Italian city of Vercelli but moved to the northern town of Verbania soon after, where she has lived ever since.

The supercentenarian is believed to be the last surviving person in the world born in the 1800s.

The 117-year-old followed the same diet for about 90 years of three eggs a day — two raw, one cooked — fresh Italian pasta and a dish of raw meat.

Italy is known for its centenarians — many of whom live on the Mediterranean island of Sardinia — and gerontologists are studying Morano, along with a handful of Italians over 105, to try to figure out their longevity. Bava has credited Morano’s long life to her genetic makeup, “and nothing else.”