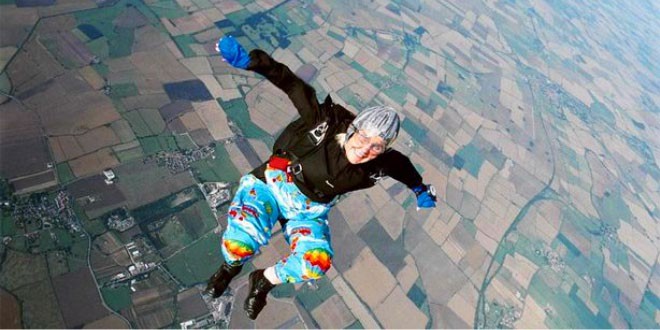 Cardiff, UK – March 23, 2016 – At 82 years old, Dilys Price — who started skydiving at 54 — has over 1,000 dives under her belt and she’s still diving out of a plane and plummeting to the ground at impeccable speeds, setting the world record for the Oldest female skydiver.

Photo: With over 1,000 dives under her belt, Dilys Price holds the World Record for the oldest female skydiver in the world. At 82 years old, she’s still diving out of a plane and plummeting to the ground at impeccable speeds.

Originally from Cardiff, Wales, Price started skydiving at 54 and remembers her first jump like it was yesterday.

“You are a bird for 50 seconds. And imagine…you can do a barrel roll, you can flip, you can move here, you can move there, you can join up with people. It’s unbelievably wonderful. I won’t stop till I know it’s not safe,” she told A Great Big Story.

Price’s jumps help raise money for her charity, The Touch Trust. Founded in 1996, the trust provides creative programs for people affected by Autism and learning disabilities.