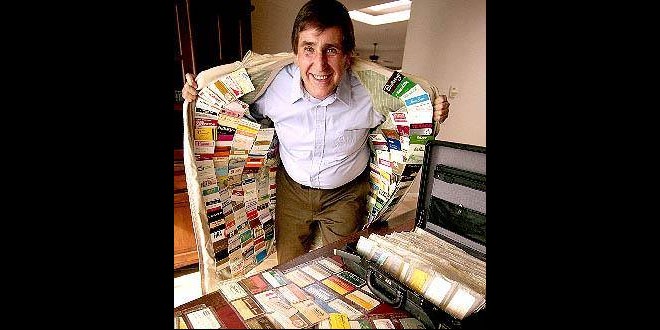 SANTA CLARA, CA, USA – January 12, 2016 — Walter Cavanagh of Santa Clara, California, has a nearly perfect credit score, mostly because he does not use many of his credit cards; he has 1497 credit cards, thus setting the world record for Most valid credit cards.

Photo: Walter Cavanagh of Santa Clara, Calif. has earned the World Record title of Most valid credit cards by keeping 1,497 credit cards in his name, amounting to a $1.7 million line of credit.

The Guinness World Records world record for the most valuable Christmas card in the world was sold at auction in Devizes, Wiltshire, UK on 24 November 2001 for £20,000 ($28,158) and bought by an anonymous bidder. Measuring 13 x 8 cm (5 x 3 in) it was sent by Sir Henry Cole, a Bath-born businessman to his grandmother in 1843 and is hand-coloured by the London illustrator John Calcott Horsley.

Walter owns these cards but uses just one card for his personal use – which is always paid off at the end of the month. However, owning all these cards means at the end of any given day, Walter has $1.7 million credit with him.

Not all cards are banking cards and with huge credit though. Walter considers no card beneath him and has cards from airliners, gas stations and even local stores with credit as low as $50!

Apart from the small cards, he also has many antique cards and also cards of companies that were once prosperous but slowly faced decline over the years. While he keeps such “antique” cards and preserves them, he does not count them in his collection. Only the cards that are valid and have a current credit score are counted by him.

To carry all his cards, he also has a special wallet and a coat. His wallet is also the longest wallet in the world at 250 feet and weighs 28 pounds! But he keeps most of them in bank safe-deposit boxes.

The issuers include airlines, petrol stations and bars, with the lowest limit just £33.95, and he has only ever been declined a card once. It was in the 1970s, and issuer JJ Newberry said he had “too much credit”.

Cavanagh, who was born in 1943, says his credit score is “nearly perfect,” and that he only uses one card that he pays off every month.