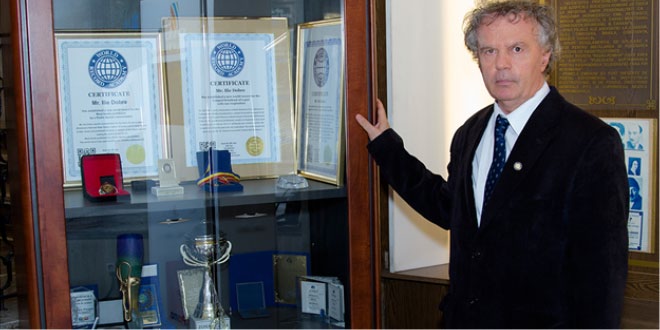 Bucharest, Romania – June 1, 2016 – After setting six world records recognized by the World Record Academy (WRA) and receiving the the “Media Man of the Year” Award from WRA, publishing over 43 books and receiving a National Award from the Romanian Presidency, Ilie Dobre, sports commentator for the Radio Romania News (Romania’s National State Radio), has set the world record for the Most Successful Radio Sports Commentator.

The Guinness World Records world record for the youngest radio presenter is Kimberley Perez (b. 20 February 1998) (USA) who hosts a show every Saturday 3-7pm, on KLAX 97.9 La Raza FM, in Los Angeles, California, USA, which started when she was 5 years old.

Guinness World Records also recognized the world record for the longest career as a radio producer; it is 55 years and was achieved by Oswaldo Enrique Yepes Peña (Venezuela) who began his career on Hit Parade de Venezuela in 1957 and has continued to work on the same show until 11 Oct 2012.

Ilie Dobre also published over 40 sport-related books and holds the record for the Most books published by a Radio Sports commentator.

The sports radio journalist and writer Ilie Dobre donated thousands of free books in schools, libraries, and hostels, to simple people both in the country and abroad, to the football fans.

“I wrote in a hurry all the time and I succeeded to publish three or four books each year. I wrote mostly in the evening and during the night, because during the day I was busy with the activity from the radio. I wrote only out of passion, the published books did not bring me much material benefits.”

“We appreciated the fact that Mr. Dobre managed to publish in a very short lapse of time, a record number of books, with diversified themes: novels, romanced biographies of the greatest Romanian personalities of sport – Cristian Gatu, Cornel Otelea, Stefan Birtalan, Nicolae Dobrin, and many others, the radiographies of the final tournaments of the World and European Football Championships,” declared Andreea Mihai, Marketing Director , Carrefour Romania SA.

Ilie Dobre has also received a National Award from the Romanian Presidency.

Ilie Dobre has set many WRA world records, including:

Dobre said he never have had any problems with his voice, simply because he “doesn’t smoke, don’t drink alcohol and cold water.”