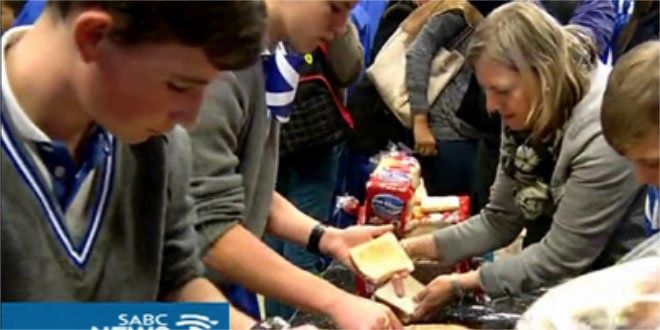 South Africa Guinness World Records: Most sandwiches made in one hour

Bloemfontein, South Africa – August 1, 2016 – Pupils from St Andrews school in Bloemfontein broke the Guinness World Record for sandwich making; armed with 1500kg of peanut butter and 100 kilograms of jam, the students clobbered together 29 000 sarmies in just one hour, thus setting the new world record for the Most sandwiches made in one hour.All Posts

Guinness World Records also recognized the world record for the most people making sandwiches simultaneously is 2,586 and was achieved by TangoTab and Friends (USA), at the Kay Bailey Hutchison Convention Center in Dallas, Texas, USA, on 27 February 2016.

Over 750 pupils took part in the event and School headmaster, Chris Thomas,says the attempt is an effort in teaching pupils to make a contribution to the world, The South African reports.

“We get the boys together and the school community to make sandwiches which we could distribute to needy people in Bloemfontein. Part of the schools philosophy is to try and teach our boys that there’s a world out there that is in need and how they can contribute to fulfilling that need.”