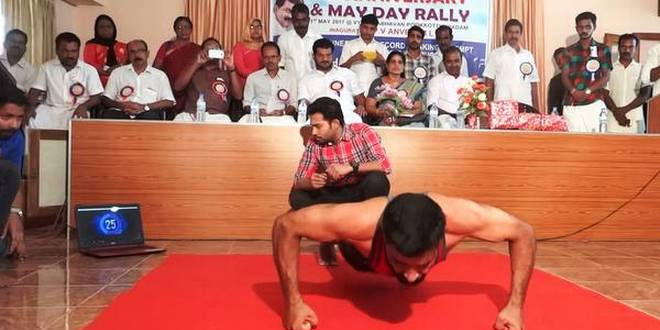 Most pull-ups in one minute

Photo: C Pradeep, bettered the world record by doing 99 push-ups in one minute.

The Guinness World Records world record for the most pull ups in one minute is 50 and was achieved by Michael Eckert (USA), in Iwakuni, Yamaguchi, Japan, on 11 October 2015.

Guinness World Records also recognized the world record for the most pull ups in 12 hours; it is 5,742 and was achieved by Andrew Shapiro (USA), in Great Falls, Virginia, USA, on 14 May 2016.

Pradeep’s performance was organised by a collective of painting workers of Amarambalam on May 1.

Pradeep, who has been a painting worker for over 30 years, is a former football player, The Mathrubhumi reports.

The current Guinness world record is in the name of Ron Cooper (USA) who did 91 push-ups in one minute.