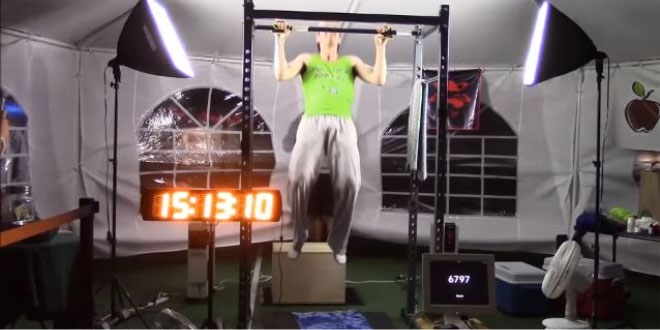 Mclean, Virginia, USA – May 19, 2016 – Seventeen-year-old high school junior Andrew Shapiro shattered three Guinness World Records at a fundraiser for the American Cancer Society; within six hours, the Langley High School junior completed 3,515 pull-ups – a new world record; by 12 hours, he had finished 5,742 pull-ups – another world record; after 18 hours of pull-ups, Shapiro stopped, having put his chin above the bar 7,306 times and thus setting the new world record for Most pull ups in 24 hours.

The Guinness World Records world record for the most pull ups in 24 hours is 6,800 and was achieved by Jan Kares (Czech Republic), in Bratislava, Slovakia, on 18-19 September 2015.

Guinness World Records also recognized the world record for the most pull ups in one hour; it is 1,009 by Stephen Hyland (UK) in his home fitness center, Stoneleigh, UK, on 1 August 2010.

Andrew beat the 6-, 12- and 24-hour record in 18 hours, with a 20-minute break after breaking the first two records. His snacks at the event were pineapple and sushi, two types of food that he likes.

He credits his success to “American Ninja Warrior,” the “Star Wars” movies, sushi and pineapple. Shapiro said he became interested in fitness after watching the show and has a long-term goal of auditioning to compete on it.

Shapiro’s training to set the world records was extensive, The Charlotte Observer reports.

To test his endurance, he performed 10 pull ups a minute for six hours straight and watched the Star Wars movies, as well as Indiana Jones and the X-Men flicks, to help pass the time.

Shapiro not only completed his goal but also raised $4,000 for the American Cancer Society.