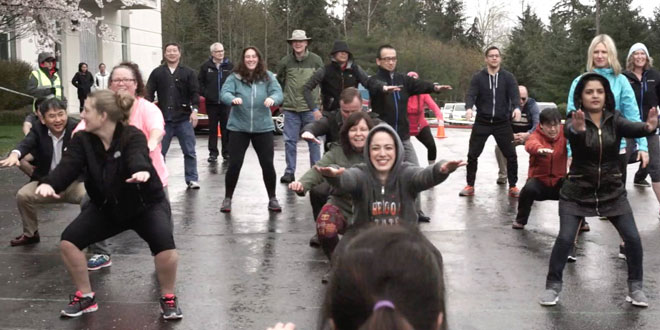 Photo: Fujifilm Manufacturing USA Inc. employees took part in a five-location effort to set a Guinness World Record for most people doing squats for for one minute. The record breaking was part of the Fuji Fit wellness initiative at the company.

The Guinness World Records world record for the most squats performed in one hour is 4,708 by Paddy Doyle (UK) at Stamina’s Boxing Self Defence Gym in Erin Go Bragh Sports Centre, Birmingham, UK, on 8 November 2007.

Guinness World Records also recognized the world record for the most people squat lifted; it is 11 and was achieved by Cosimo Ferrucci (Italy), in Trani, Italy, on 2 June 2016.

Employees of Fujifilm SonoSite, Inc., in Bothell recently joined colleagues from other Fujifilm sites to help break the Guinness World Record for the most people performing air squats for one minute.

In total, 817 Fujifilm employees participated simultaneously, including 71 from the Bothell office. The record breaking was part of the Fuji Fit wellness initiative at the company, The Bothell Reporter reports.

The previous Guinness world record of 331 people was held by the Russian Kettlebell Federation.