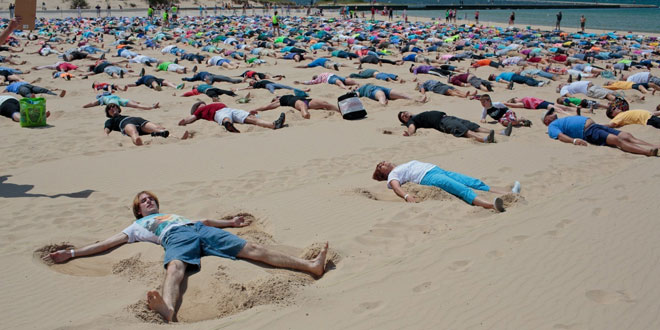 Ludington, Michigan, USA – June 29, 2017 – A total of 1,387 people angelically assembled on a Lake Michigan beachfront in Ludington and worked their magic for 30 seconds, thus setting the new world record for the Most people making sand angels simultaneously.

Photo: The Ludington Daily News and The Muskegon Chronicle report 1,387 people angelically assembled on a Lake Michigan beachfront in Ludington on Saturday and worked their magic for 30 seconds. That far surpasses the roughly 350 who made sand angels for 15 seconds two years ago in Pembrokeshire, Wales.

The Guinness World Records world record for the largest gathering of angels is 1,275 participants, achieved at an event organised by Misericordia Health Centre Foundation (Canada), in Winnipeg, Manitoba, Canada, on 1 December 2015.

Guinness World Records also recognized the world record for the most people making snow angels simultaneously; it is 8,962 at the State Capitol Grounds in Bismarck, North Dakota for an event organized by the State Historical Society of North Dakota on 17 February 2007.

The event, which had a $20 suggested donation, raised money for the hospital’s cancer service center.

The effort was part of “Love Ludington” weekend, which also features the opening of the Port of Ludington Maritime Museum.