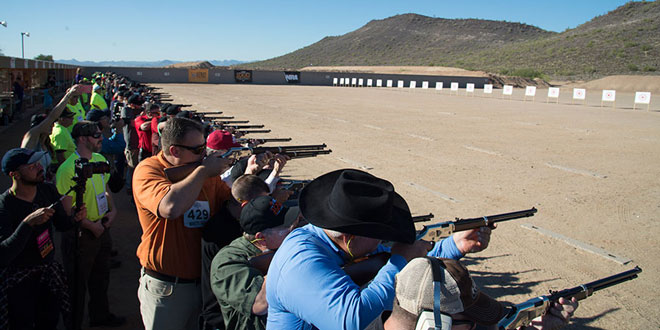 Phoenix, Arizona, USA – November 30, 2016 – After more than a year of planning, 1,000 freedom-loving Americans have descended on Phoenix’s Ben Avery Shooting Facility in Phoenix, Ariz. to make history; dubbed the 1,000 Man Shoot, attendees sought to set the world record for most people firing two shots simultaneously, by lining up on the range and firing a shot from a special edition .22-caliber Henry Golden Boy Silver rifle and then firing a second shot minutes later.

Photo: The National Rifle Association and Henry Repeating arms teamed up on Monday, Nov. 14th, to celebrate the 2nd amendment and set a world record by firing 1000 .22 caliber rifled simultaneously.

The Guinness World Records world record for the largest calibre guns ever mounted on a ship were the nine 45.7 cm (18 inch) guns installed on the Japanese battleships Yamato and Musashi. The shells weighed 1,452 kg (3,200 lb) and could be fired 43.5 km (27 miles). Yamato and Musashi were the largest battleships ever to sail. Both ships were sunk by American aircraft (in 1944 and 1945) before their massive guns could be fired in anger.

Guinness World Records also recognized the world record for the loudest paper gun; it measured 103.8 db and was produced by Takuya Tojo (Japan) at Park Challenge / GWR Live! in Tokyo Midtown, Tokyo, Japan, on 5 May 2010.

From all accounts the plan went off without a hitch, and the 1,000 present achieved the world record. The event was well-documented with visual evidence, leaving no question as to whether the attendees’ goal was reached.

The event was initially planned by NRA and Henry Repeating Arms as an expression of support for, and to raise money in defense of, the Second Amendment.

However, according to one media outlet present, the event also took on an air of celebration, thanks to Donald Trump’s victory in the presidential election.