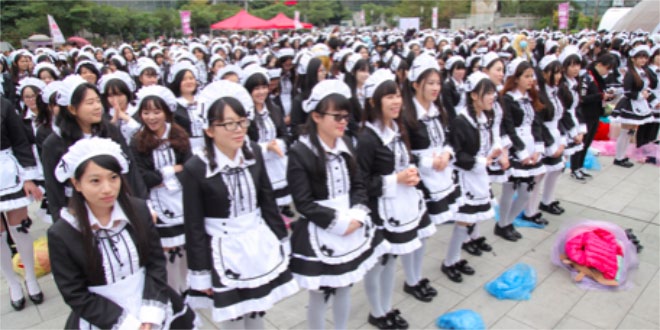 Xiamen, China – January 30, 2016 – China added yet another World Record to its long list of accolades when 715 girls gathered together to break the hallowed record of the “most people dressed as maids at the same time;” rather than the traditional French maid costume, the girls opted for the Japanese variety.

Photo: 715 girls in Xiamen dress up together as Japanese maid-servants, break yet another Guinness World Records world record.

The Guinness World Records world record for the largest gathering of people dressed as French maids is 695 at an event organized by Misha Collins (USA) in Seattle, Washington, USA, on 3 August 2014.

Guinness World Records also recognized the world record for the largest gathering of people dressed as cartoon characters; it was achieved by 905 participants dressed as characters from the Flintstones in an event organised by Muckno Mania Festival (Ireland), in Co Monaghan, Ireland, on 16 July 2010.

Rather than the traditional French maid costume, the girls opted for the Japanese variety, famously worn by waitresses at “maid cafes,” known for treating their customers more like masters.

Previously, that Guinness World Records world record had been held by Seattle with 695 maids, Xiamen crushed it by adding an extra 20 ladies.