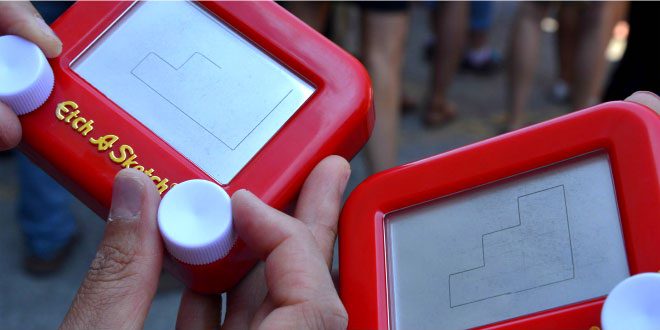 Canada Guinness World Record: Most People Drawing on an Etch A Sketch

Toronto, Canada – July 13, 2016 – To celebrate the company’s first Etch A Sketch Day – the anniversary of the day the first Etch A Sketch was sold – 440 Spin Master employees around the world set a brand new world record title for Most people drawing on an Etch a Sketch (multiple venues).

The Guinness World Records world record for the most people drawing on an Etch A Sketch is 372 and was achieved at an event organised by Jeff Gagliardi and Clark Hodge (Both USA) in Lyons, Colorado, USA, on 25 June 2011.

“Etch A Sketch is regarded as one of the most memorable and creative toys of the twentieth century,” said Ben Gadbois, President and COO, Spin Master Ltd.

“We’re thrilled to honor the brand’s first Etch A Sketch Day as part of the Spin Master family in epic style and look forward to celebrating many more milestones as we reach new generations of consumers.”

Adding to the festivities, the Amazing ETCH MAN, Christoph Brown, recognized as the world’s fastest Etch A Sketch artist, joined Spin Master in Toronto to create Etch A Sketch portraits.