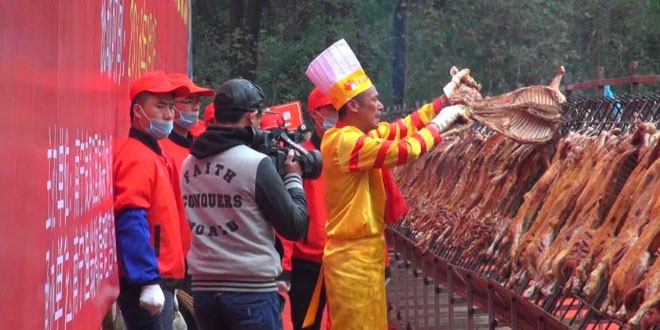 Beijing, China – February 22, 2016 – A cook in Southern China has broken a Guinness World Record by roasting 216 lambs by himself; Jiang Linsheng broke the record for Most lambs roasted simultaneously.

The Guinness World Records world record for the most lambs spit-roasted simultaneously is 196 lambs and was achieved by VIP Shop (Jianyang) E-commerce Limited Company (China) in Jianyang, Sichuan, China on 23 January 2016.

Guinness World Records also recognized the world record for the largest serving of roast pork; it weighed 4,045 kg (8,917.7 lbs) and was achieved by Calata Corporation (Philippines) in Quezon City, Philippines, on 8 November 2015.

During the challenge, which he completed in two hours, Jiang scuttled back and forth to baste, sprinkle herbs and re-roast the meat.