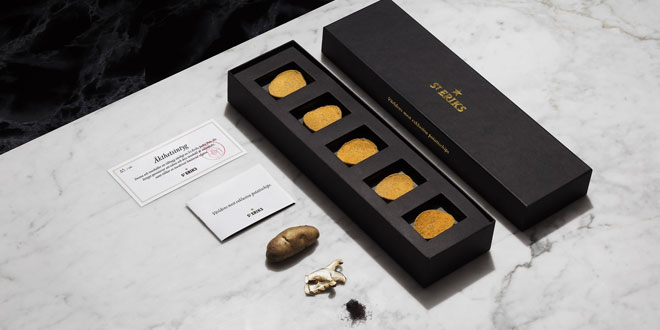 Photo: Swedish beer maker St. Erik’s Brewery partnered with a chef to make the world’s most expensive potato chips at 5 chips for $56.

The Guinness World Records world record for the most expensive hamburger sells for $5,000 (£3,188.37) and is prepared by Juicys Foods and Ovations Foodservices for Juicys Outlaw Grill, based in Corvallis, Oregon, USA, as of 2 July 2011.

Guinness World Records also recognized the world record for the most expensive of all caviar, and indeed the world’s most expensive food’ it is ‘Almas’, from the Iranian Beluga fish – 1 kg (2 lb 3 oz) of this ‘black gold’ is regularly sold for £20,000 (then $34,500).

In an effort to create “the world’s most exclusive chip” to complement its premium line of brews, the brewery partnered with the Swedish National Culinary Team, according to Adweek.

The chips, which used the recipe especially concocted by chef Pi Le, were reportedly individually handmade by a chef. “All of the chips have been made by hand,” chef Pi Le was quoted as saying.

“It took a delicate touch, a finely honed sense of taste and time to ensure that each chip would achieve a perfect balance between the various ingredients.

“The taste is a very Scandinavian one. Most people recognize potatoes and onions, but what stands out is the quality. All of the ingredients are of a stature that not many will have tried before. These chips are an excellent accompaniment to craft beer, or simply enjoyed on their own.”

The crisps were a hit despite its exorbitant price — the initial batch of 100 boxes was immediately sold out upon launch last month.