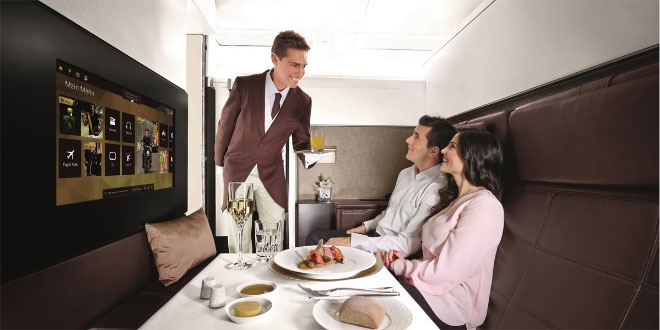 New York City, New York, USA – May 11, 2016 – Etihad Airways’ new route connecting Mumbai and New York City via Abu Dhabi has the distinction of having the most expensive ticket in the world for a commercial scheduled flight; a one-way ticket on its private luxurious suite, The Residence, costs around Rs. 25 million, or about US$38,000, setting the new world record for the Most Expensive Plane Ticket.

Photo: With a living room, separate bedroom and ensuite bathroom, The Residence by Etihad, is the only three-room private cabin in the sky. A one-way ticket on its private luxurious suite, The Residence, costs around Rs 25 million, or about US$38,000.

For $38,000, passengers can book a one-way ticket on Etihad’s famous Residence, a private cabin that includes a bedroom, lounge, and private bathroom.

The Residence exists only on Etihad Airways’ Airbus A380, which has the distinction of being the largest passenger plane in the world.

Aside from 125 square feet of space, $38,000 gets a passenger a private butler, a personalized menu by an inflight chef, and concierge service—including a luxury chauffeur, private check-in, and lounge.

Etihad operates seven A380s, each with a different version of The Residence. Mumbai has become the fifth destination where it operates A380s, apart from London, New York, Sydney and Abu Dhabi.

The previous world record for most expensive commercial flight was also held by Etihad—for $32,000, the carrier took passengers from New York to Abu Dhabi.