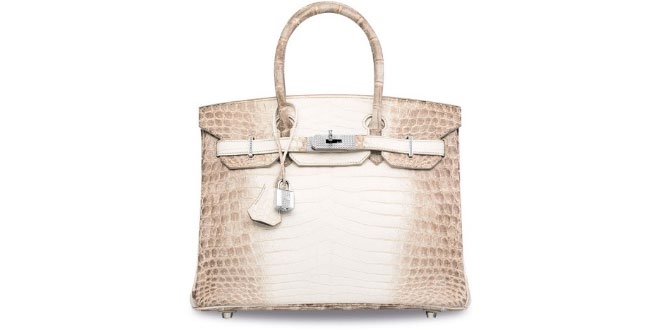 Hong Kong, SAR China – May 31, 2016 – A matte white Diamond Himalaya Niloticus crocodile diamond Birkin 30 with 18k white gold and diamond hardware, was sold by a private Asian collector for $300,168 – making it the most expensive handbag ever sold at auction.

Photo: This Hermes signature Birkin is made with white matte Himalayan crocodile leather, and features hardware made from 18k white gold and diamonds. It sold for $300,168, making it the most expensive handbag ever sold.

“The diamond pieces created by Hermes are exceptional, but none are nearly as iconic as the Himalaya,” Christie’s said in a press release prior to the sale.

“It is believed that only one or two of the Diamond Himalayas are produced each year, globally, making it one of the lowest production runs for handbags.”

“Its rarity and exclusivity, the quality of leather and craftsmanship, its style and the ability to customize,” all contribute to making this the most valuable bag in the world today, according to New York-based appraiser Helaine Fendelman, of Helaine Fendelman & Associates.