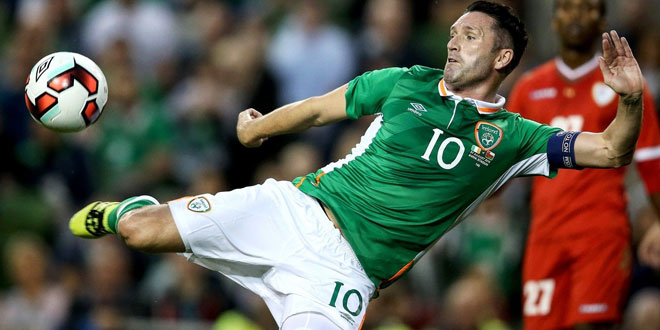 Photo: By scoring a goal at international level in 19 consecutive years, Robbie Keane has achieved a feat unparalleled in the history of football. Ireland’s Robbie Keane scores Ireland’s second goal against Oman.

The Guinness World Records world record for the Fastest hat-trick in an international football (soccer) match was set by Japanese international Masashi ‘Gon’ Nakayama, who scored a hat-trick in 3 min 15 sec against Brunei during an Asian Cup qualifing match played on 16 Feb 2000. Nakayama netted on one minute, two minutes and three minutes fifteen seconds, bettering the 62-year-old mark set by England’s George William Hall, who scored three in 3 minutes 30 seconds against Ireland at Old Trafford, Manchester, UK on 16 November 1938.

Guinness World Records also recognized the world record for the most players in a 5-a-side football exhibition match; it is 676, and was achieved by Petts Wood Football Club (UK), in Bromley, UK, on 19-20 May 2012.

Robert David “Robbie” Keane (born 8 July 1980) is an Irish professional footballer who last played for Major League Soccer team LA Galaxy as a forward. He served as captain of the Republic of Ireland national team from March 2006 until his international retirement in August 2016.

Keane’s record, which began in 1998 and ran until 2016, is unrivalled, with Irish Abroad noting a Hungarian player, Imre Schlosser-Lakatos, as being the closest. He netted goals in 16 consecutive years at International level, from 1906 to 1921.