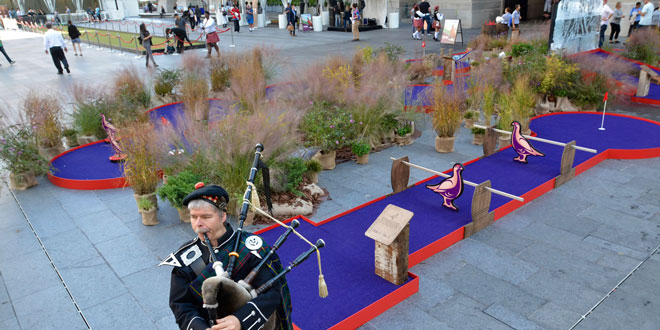 Photo: Bagpiper Charles Rutan of Philadelphia plays the pipes next to a miniature golf course set up as part of “the world’s largest putting green” event at Dilworth Park at City Hall. A 104 foot and 2 inch putting green at Dilworth at which former Eagle Hollis Thomas helped set a World Record was part of the event. The event was sponsored by The Famous Grouse, Scotland’s number one Scotch.

Guinness World Records also recognized the world record for the largest golf chain store; it is Golf Partner (Japan) with 260 stores, all of them in Japan, as of 31 March 2012.

The Famous Grouse turned the lawn in front of City Hall into an interactive experience in order to break the Guinness World Record for the Longest Practice Putting Green.

The world record was set when the golf ball was sunk into the hole.

Rocco Cima, iHeartRadio DJ, hosted the event where the Philadelphia public could putt on the 104 feet 2 inch putting green, contribute to The Famous Grouse mosaic art installation and play a round of mini golf on a course comprised of treacherous bridges, ice luges and electronic grouse.

The Famous Grouse also donated $10k to the Center City District Foundation so that they can continue to improve downtown Philadelphia.

The event was open to consumers 21+.