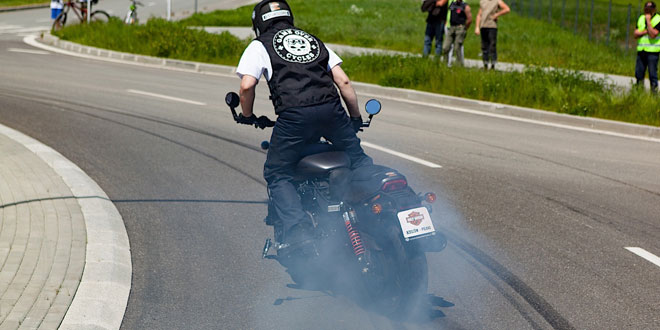 Rzeszow, Poland – July 3, 2017 – On the 20th of May 2017 in the city of Rzeszów, south-east Poland, Maciej Bielicki, leading Polish stunter and the only stunter in Poland, did a continuous rolling burnout over a distance of 4.479 kilometers (2.78 miles) thus setting the new world record for the Longest motorcycle burnout.

Photo: Maciej “DOP” Bielicki did a continuous rolling burnout over a distance of 4.479 kilometers (2.78 miles). The record was set on the first attempt, and the bike on which it was set was the latest Harley-Davidson Street Rod powered by a 750cc V-twin.

The Guinness World Records world record for the largest simultaneous motorcycle burnout is 300 and was achieved by Ropali Motorcycles, Kymco, FDR and History (all Philippines), in the Tagaytay Convention Center, Tagaytay City, Philippines, on 11 April 2015.

Guinness World Records also recognized the world record for the longest motorcycle ramp jump; it is 106.98 m (351 ft) by Robbie Maddison (Australia) at the Crusty Demons Night of World Records at Calder Park Raceway in Melbourne, Victoria, Australia, on 29 March 2008.

The event was organized by GOC Harley-Davidson Rzeszów, the biggest Harley-Davidson dealership in Poland and Central-Eastern Europe and Game Over Cycles (GOC), custom bike manufacturer and owner of H-D Rzeszów dealership.

The bike on which the record was set is the latest Harley-Davidson Street Rod™ (750 ccm engine), which was unveiled in March 2017.

The previous world record was set last year in the USA, when on the bigger capacity engine (1200 ccm) the distance covered was 3,7 km (2,3 mi).