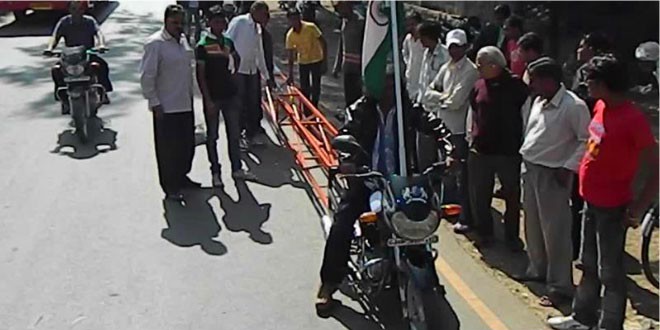 Gujarat, India – January 4, 2016– Bharat Sinh Parmar, 30, from Gujarat, modified a traditional two wheeler – stretching it to a length of 26.29 metres, making it the World’s longest motorcycle.

Photo: Bharat Sinh Parmar, 30, from Gujarat, modified a traditional two wheeler – stretching it to a length of 26.29 metres, making it the World’s longest motorcycle.

The Guinness World Records world record for the most people on one moving motorcycle is 56 and was achieved by the Indian Army Corps of Signals ‘Daredevils’ Display Team (all India) at Dumna Airport, Jabalpur, India, on 28 December 2013. The men rode a single 500 cc Royal Enfield Bullet motorcycle a distance of 1,100 metres.

Guinness World Records also recognized the world record for the tallest rideable motorcycle; it measures 5.10 m (16 ft 8.78 in) tall from the ground to the top of the handlebars. It was constructed by Fabio Reggiani (Italy), and the motorcycle was ridden over a 100-m course at Montecchio Emilia, Italy, on 24 March 2012.

To attain his world record Bharat had to successfully ride the bike for a minimum distance of 100 metres – a tricky challenge for such a long, two-wheeled vehicle.

“All the previous world records came quite easily, so I wanted to do something that takes a lot of effort. This brought me to the idea of largest motorcycle. Initially it seemed impossible, but I made it to the record book yet again,” he said.