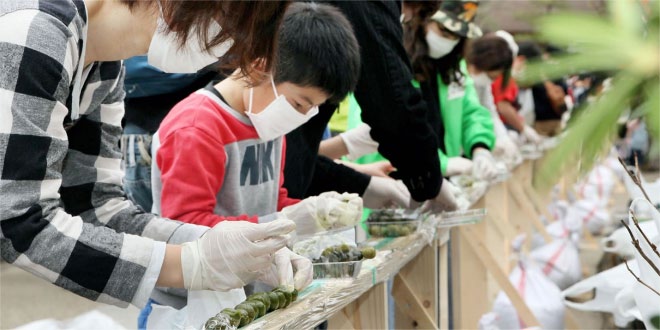 Photo: A line of 16,291 green tea dumplings running between two World Heritage sites in Kyoto Prefecture’s history-steeped city of Uji set a World Record for the longest such line.

The Guinness World Records world record for the largest display of rice dumplings contained 34,056 dumplings and was made by Towngas Rice Dumplings for the Community (China) at Hong Kong International Trade & Exhibition Centre in Hong Kong on 10 June 2007.

Volunteers from local charities and businesses took three hours to set up the line of roughly 3-cm-wide dumplings on wooden stands stretching between Byodoin Temple and Ujigami Shrine, both UNESCO-designated World Heritage sites.

After clinching the record, the volunteers took home the dumplings, which were made with the area’s renowned Uji green tea.