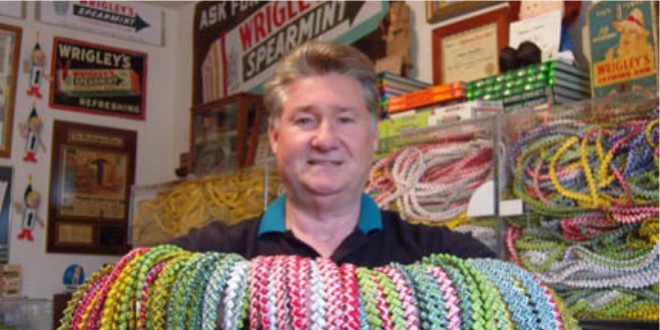 Virginia Beach, Virginia, USA – March 20, 2016 – For the past 22 years, Gary Duschl has held the Guinness World Records world record for his unique hobby; in an effort to top his achievement, he added more than a mile to the chain since last year; it’s now made up of 2,142,857 wrappers and 89,431 feet long, thus setting the new world record for the Longest gum wrapper chain.

Photo: In an effort to top his achievement, he added more than a mile to the chain since last year. It’s now made up of 2,142,857 wrappers.

Guinness World Records also recognized the world record for the longest chain of staples; it measures 233.74 m (766 ft 10 in) and was constructed by Jeffrey White (USA). It was presented and measured in Barre Town, Vermont, USA, on 17 August 2012.

The chain is now 89,431 feet long – about 10 miles short of a marathon – and is stored in custom-made plexiglass cases in Duschl’s home, The Virginian Pilot reports.

The room where he keeps it could be a Wrigley’s museum. It has gum memorabilia dating back to 1895.

It all started when Gary Duschl, originally from Canada, was 14. His class had a competition for the longest gum wrapper chain. He collected 20 Wrigley’s wrappers and made one. Fifty-one years later, he’s still adding to it.

He uses wrappers from Juicy Fruit, which is his favorite, Big Red, Winterfresh and Doublemint. He makes 40-foot segments of each color and then moves on to the next one.

The chain is about $150,000 worth of gum, but he hasn’t paid for all of it. Friends and family – and even Wrigley – send him wrappers to use.