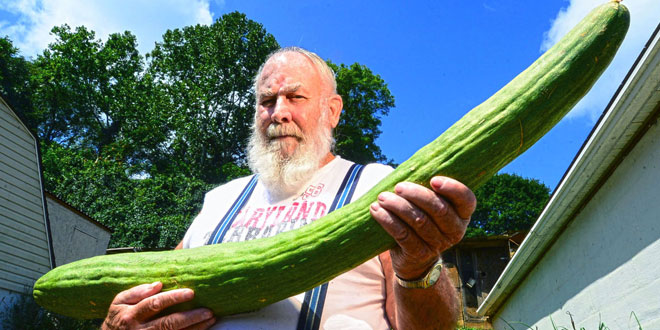 Knoxville, Maryland, USA – November 7, 2016 – Butch Taulton, 72, grew a 43-inch exotic cucumber in his garden next to the garage at his Knoxville, Md., home, thus setting the new world record for the Longest cucumber.

The Guinness World Records world record for the longest cucumber measures 107 cm (42.1 in) and was grown by Ian Neale of Wales, UK. It was presented at the Bath & West Showground in Shepton Mallet, Somerset, UK, on 26 September 2011.

Taulton said that when he measured the colossal cuke after taking it off the vine, he was shocked to discover it was a whopping 43 inches long.

It was planted roughly three months ago next to his garage from seeds he purchased at Home Depot with a label that said they were “exotic” cucumbers.

“I just kept watering it and it kept growing,” said Taulton, as he lugged around his gigantic green prize on his 3-acre farm.

“I’ll just cut it down and take the seeds out,” he said. “I’ll plant some of the seeds next year.”

As for actually eating his creation, Taulton said it is of the “exotic cucumber” variety, making it sweet, tender and tasty. But he doesn’t have much time to consume the gigantic beast.

Taulton is retired after 16 years in the road construction business. His wife takes care of the inside of the home while he grows a small garden behind the house and tends the goats, he said.

This is not the first time Taulton has grown exotic cucumbers. Two years ago, he grew one that measured 39 inches long, he said. “The packet of seeds from Home Depot said they would grow between 32 to 36 inches long,” he said. “They weren’t suppose to get this big.”