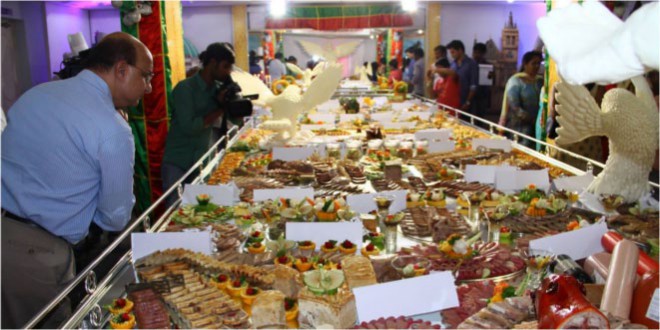 Photo: World’s Longest Cold Meat Platter was made by 100 Chefs in 800 man hours with 300 Kgs of meats. This was presented on the occasion of Christmas celebrations by Culinary Academy of India. Chef Sudhakar N. Rao mentioned that for the above Platter chefs used Turkey, Fish, Prawns, Chicken, Lobster Vegetables & Fruits.

The Guinness World Records world record for the most people slicing meat is 162, achieved at an event organised by Antonio Ramos García (Spain) in Benarraba, Spain on 2 March 2014.

As part of the Christmas Celebrations, Culinary Academy of India made various cold meat items for the Longest Cold Meat Platter.

The platter was made by hundred Chefs with 300 Kgs of Meat in 800 man hours.

Mr. Gustav Gropp, Principal of Oakridge International School was the Chief Guest for the celebrations.

The Platter has clearly demonstrated the skills of the students, their performance levels and interest.